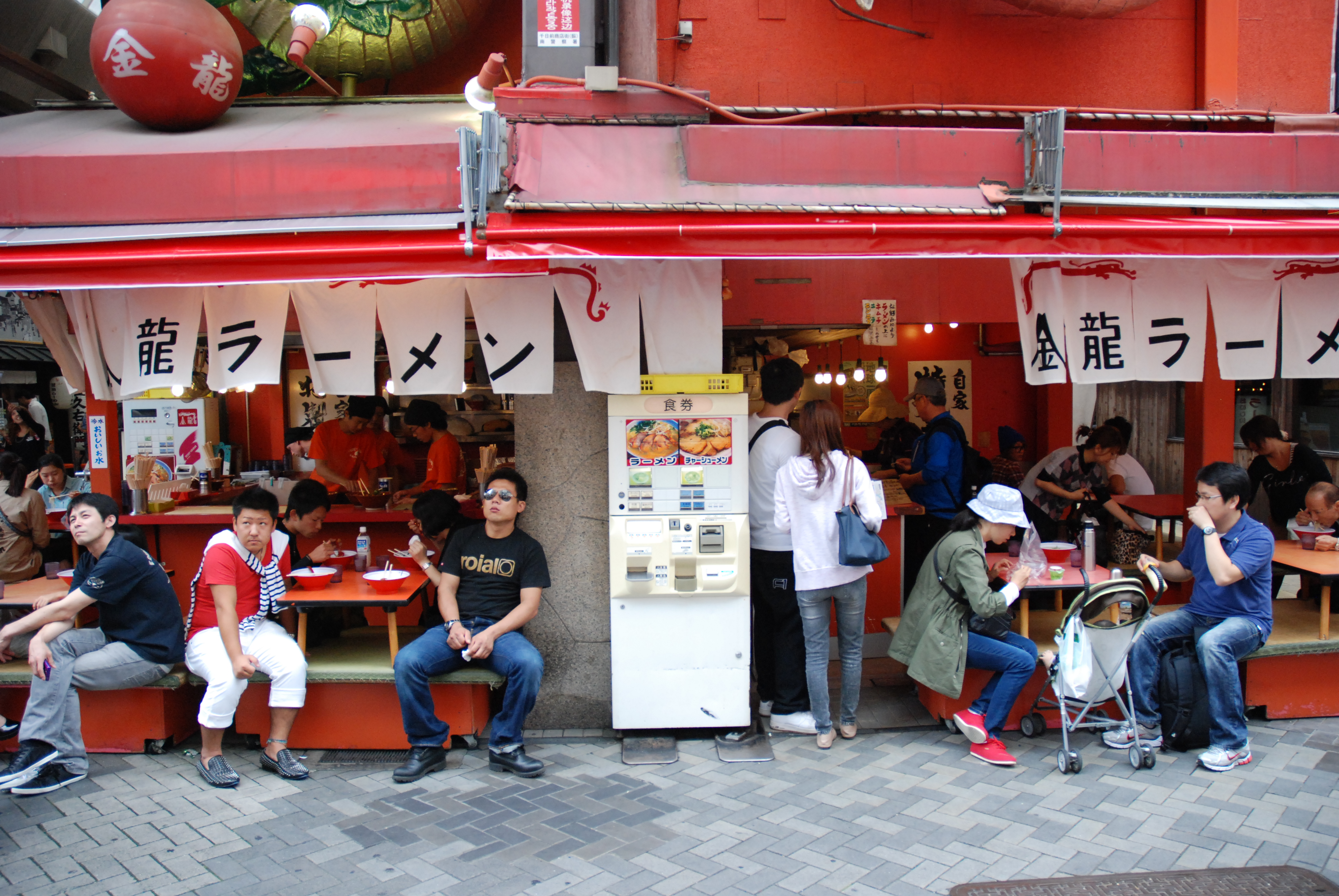 “Usually our staff are Korean, Japanese and Chinese. You’re the first Caucasian worker our shop has ever had,” says Mr Hayashi, the owner of the Kinryu (The Golden Dragon) ramen chain, as he gives me the clothes I will be wearing for my day as a noodle chef. I become acutely aware of how different I look as soon as I put on the white boats, black trousers, branded T-shirt and head wrap that all his staff wear. As soon as I walk into the dining area, I notice I’ve gone from anonymous to the person that everyone wants to point and stare quizzically at. Even the eponymous dragon on the side of the Kinryu building seems to look at me bemusedly as I enter the kitchen and bow to the other workers.

The Golden Dragon is the perfect location to spend a day as a ramen chef. The building, with its famous dragon, has become an Osakan icon and was one of the first to start using giant models on the sides of buildings. Since it was featured in overseas magazines, it has also become a hit with international visitors. One of the keys to its success has always been its 24-hour opening times. The typical customer changes frequently throughout the day from businessmen in the morning to bar hostesses late at night. For the workers this means learning how to provide customer service to all walks of life. For the restaurant it meant adapting the recipe so the broth was light enough for everyone to enjoy. The broth is based on soy sauce, but the recipe is a closely guarded secret.

As my work experience progresses, my unlikely presence soon becomes accepted by most of the customers. I briefly talk with one who assumes I’m a 30-something student in need of cash. My discussion is interrupted by Mr. Hayashi who explains the importance of preparing food in the Kinryu way. His brand has always prided itself on making sure that everything is as natural as possible, I am told, so my job today will be to prepare a bowl from scratch. My first job will be to slice up strips of raw meat to be cooked and used to make the broth and the toppings.

Because the job involves handling raw meat, Mr Hayashi guides me through his 5-point hand-washing technique. While most people know they should wash their hands thoroughly, at Kinryu the hands are only the beginning. You then have to scrub your wrists, the area where you wore your watch, each individual finger and then scrape your palms before you are ready to begin work. Once he’s satisfied that I’m clean enough, I start work slicing the flesh. But as I’m nervously wielding the razor-sharp knife, Hayashi also gives me a lesson in the p’s and q’s of customer relations: “Always greet customers with ‘Irasshaimase’ and say goodbye with ‘Oki-ni’ . And if you go anywhere near the chefs working with boiling water, always shout ‘Torimasu’ (“passing”) before you walk behind them.”

After I have finished cutting up the pork, I have to clean my work area. This is easier said than done. As anyone who prepares ramen at home knows, if you leave the broth in the bowl for too long, a stubborn layer of oil can form on the sides. For this reason, the taps at this restaurant have been modified to release a mixture of oil and water. This mixture is then washed around the bowls to get rid of this annoying oily residue. Luckily for me, this also cuts the cleaning time dramatically. With the plates finally cleaned, the owner announces that he wants to give me a reward: the chance to prepare my own lunch ramen. “The training takes about 10 days and boiling noodles is usually the last thing taught,” Mr. Hayashi explains. I feel a little nervous as I approach the vats of boiling water, but my tutor explains that he will stand beside me and guide me through it.

While the sight of me slicing meat and doing the dishes was of some interest to the customers, as soon as I move on to preparing the noodles themselves, I realize that I have crossed the line from ‘interesting’ to ‘fascinating’. I notice customers secretly recording me with their phones. I feel a little pride at my sudden celebrity status, but I have to try to ignore it. The next stage involves taking a ball of ramen and dunking it into a net suspended in the boiling water. The experienced chefs can get the noodles into the water without even disturbing it at all. Not me, though. Unnerved by all the eyeballs on me, I drop the noodles too suddenly and the seething water spits angrily at me. Most of the chefs tell me that the heat is one of the toughest things about the job and even though it’s the middle of autumn, I can see what they mean. As the steam from the hot water blows in my face, the effects of standing all day begins to overcome me, making my head swim.

Getting the noodles into the water was tricky enough, but working out when they are ready involves a lot more skill. While guesswork may be ok at home, ramen chefs know that the difference between delicious noodles and mush is a couple of seconds. They check the noodles regularly, waiting for the exact moment they are ready. Any home chefs take note: to tell whether a piece is perfectly cooked or not you should remove a strand from the water and press it lightly with your finger. A perfectly cooked piece should be clear on the outside and have a yellow colour in the middle. “We don’t use a timer here any more,” Mr. Hayashi says as he shows me the technique. “People like to see noodles prepared this way too.”

Once the noodles are cooked, the ingredients must be added in a strict order to make sure no flavours are obscured or ingredients become too soggy. The soy sauce goes first as it’s the base of the dish and most important ingredient. Then come raw bean sprouts, followed by the broth which ‘cooks’ them. The noodles go in next to soak up the flavour of these ingredients. Finally, three slices of pork, a handful of green onions and a dash of sesame seed oil complete the recipe.

I take my finished bowl of ramen to the side of the counter and wolf it down. I’ve just spent a couple of hours creating a single bowl of ramen and it has given me a newfound respect for the chefs who have to produce between 60 and 80 bowls an hour at busy times.