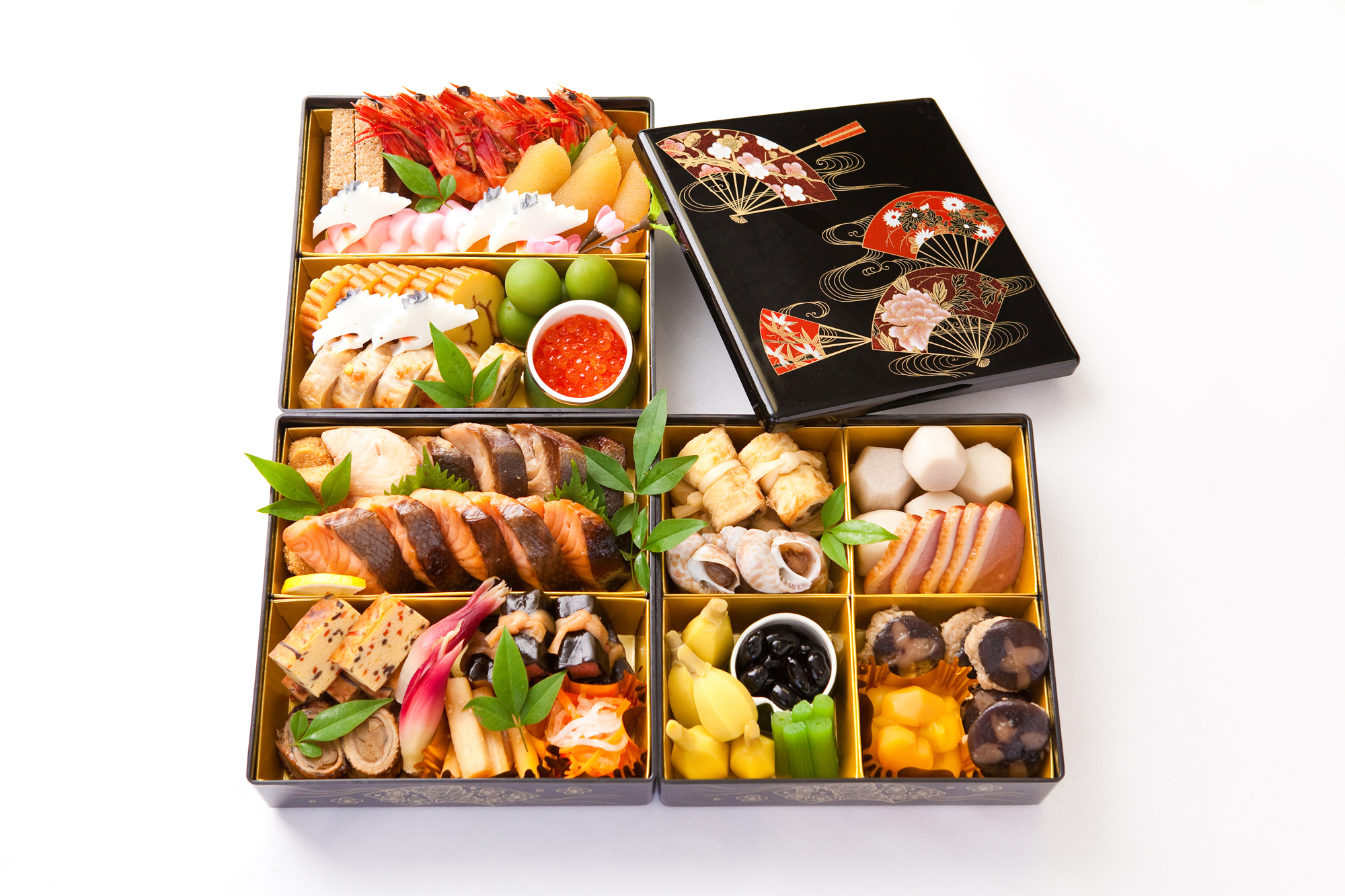 For many expats, the festive season means turkey, tinsel and Christmas cheer. But in Japan, these holidays are all about the new year. From December 29 to January 3, most Japanese people will be enjoying a few days off work, lots of sake and a few traditional seasonal foods. Although warm mochi may be the most comforting food to eat over the winter break, osechi ryori is the most highly regarded. This elaborate bento box is filled with a variety of foods, each with their own unique story to tell. In the past, these pickled and salted morsels would see families through the national holidays when stores would close.

The three-tiered boxes themselves are known as Jubako (重箱), and are similar to your standard bento box as they stack together neatly. They range in size and price from a mere ¥1,000 at your local convenience store to speciality sets coming in at over ¥500,000 (for example, those sold in the Kaga or Noto regions of Japan). Each tier holds a different assortment of foods, separated into compartments to keep flavors from mixing. This tradition of packaging food in parcels has its roots in the Heian Period, over a thousand years ago, when it was forbidden to cook during the three-day new year’s celebrations.

Kamaboko/蒲鉾
A ground fish paste that, while not tasting too bad, has a texture some may find revolting.

Datemaki/伊達巻き
This sweet omelet-like food, often mixed with fish paste or prawns, is said to bring on more days of prosperity and good luck in the coming year.

Tai/鯛
Better known as red sea bream, this tasty little treat guarantees a prosperous year as the “tai” could be taken from omede tai (おめでたい) or congratulations.

Kombumaki/昆布巻き
If you want a really happy new year, this often slimy seaweed wrap is worth forcing down, as the Japanese word for joy, yorokobu (喜ぶ), is said to sound like the word for seaweed, konbu (昆布).

Nishiki Tamago/錦卵
Need to sort out the finances this new year? Then eat up this egg roll. The yolk and egg white are separated before being cooked, resulting in yellow yolk that symbolizes gold and white for silver, which is sure to help keep your finances in eggcellent shape. (Sorry for the awful yolk…I mean joke)

Kazunoko/数の子
If you’re eating osechi with the in-laws, they may try and force a little of this herring roe on you, as it promises a bounty of healthy children in the new year.

Satoimo/里芋
These tiny peeled potatoes are as sticky as the nagai-imo root that makes tororo noodles. Although said to be extremely healthy, they can be a little hard to swallow (literally).

Tazukuri/田作り
*not pictured These dried sardines may not be to everyone’s taste, but if you have to work in a rice field in the coming year, they might just be your best friend. The kanji translates as “to make a rice paddy” and it is said these little tykes helped fertilize the soggy fields way back when.

Kuromame/黒豆
Directly translated as “black beans” the word mame can also mean “health” in Japanese, so eating a few of these magic beans is advisable for anyone wanting a fighting fit year.

Kurikinton/栗きんとん
Chestnuts may be popular in the west around Christmas, but these would go unrecognized by many an untrained eye. The glazed, yellow spheres have a bitter aftertaste to them.