As beach season begins and the summer heat and humidity kicks in, flocks of locals, expats and visitors alike head to the cooling waters and vibrant beach at Suma, just west of Kobe.

Throughout July and August, the seafront is a throng of activity as young families escape the city, bikini-clad ladies soak up the sun (or try to hide from it), and muscular men show off their tans while trying their luck with said ladies. But if the beach parties and slightly hedonistic vibe gets a little too much, there is another alternative. Unknown to many, Suma has a secret side just waiting to be explored.

A series of rolling hills that form the tail end of the well-known Rokko mountain range overlook the beach and this side of Osaka Bay, and amongst their myriad of trials there is adventure to be had for anyone looking to get away from it all and yet still be within clear sight of the city. Popularly known as the Suma Alps, a traverse of these green but surprisingly rocky slopes can be undertaken in an afternoon by anyone of reasonable fitness, and the fantastic views of Kobe, Awaji Island, and the Inland Sea more than make the sweat and fatigue worthwhile. 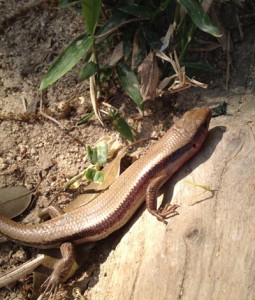 There are a number of approaches to the hike, but perhaps the best way is to start from Itayado Station. After exiting the station, head north through the shotengai (roofed shopping street). Grab a few energy-packed snacks for the hike, then turn left at the end of the shotengai, before crossing the road and walking parallel to the small river. Cross it via one of the narrow bridges and start marching towards the hill up ahead. You basically want to aim for Itayadohachiman Shrine, which is perched halfway up the hillside, and can be found by navigating the maze of narrow backstreets, which are picturesque in their own Japanese suburban way. Keep your eyes peeled for the small signs (in Japanese) which will point you in the right direction. After a short slog up some twisting stairs, you will reach the shrine, so after catching your breath and saying a few prayers for luck, you’ll soon find the path which signals the proper start of the hike.

From here the trail meanders gently through some green and lightly wooded areas, and if you started a little late in the day you’ll pass families and elderly folk cheerily making their way back home. You’re just getting started however, so keep following the path as it gradually ascends the hill, before eventually leveling out once again at the ridge top. There are plenty of places to stop and catch your breath, with benches offering splendid views of the urban sprawl below. The path is clearly marked and continues following the ridge, with the trees providing ample cover for hikers and a haven for lizards, butterflies and other creatures (don’t forget your bug spray!).

Despite this being a popular hike, the hills feel a world away from the noise and concrete of the streets below. Before long, you’ll reach the top of Higashiyama, a great place to stop, as this high point commands impressive views in all directions. But don’t get too comfortable, as the fun is just about to begin.

Between here and the next hilltop, the path drops down to, and then ascends, a rather precarious-looking rocky ridge known as the umanose (horse’s back), and hikers can feel like real alpine adventurers as they scramble down, up and across its narrow and crumbling crest. The rock is very slippery when wet, and there’s not much more traction when it’s dry either, so proceed with care. The fun is rather short-lived however, so after the obligatory mountain poses and photos, heave yourself up the stairs and follow the path to the high point of this walk. Yokoo-san stands at 312m tall, which may not be very alpine in stature, but the panoramic 360-degree views of the surrounding hills, city and sea are worthy of any lofty mountain top.

From here the path gradually winds its way downhill and southwards through some quiet and pleasant woods, before the trees abruptly thin out and you arrive at a sturdy wooden viewing platform which offers some of the best views of the day. After enjoying the panorama, follow the path which heads slightly to the right and then down some steep stairs to the road below. Cross the bridge for pedestrians and follow the path as it snakes between apartments before reaching the final big climb of the hike, up five sets of concrete stairs! After that leg-burning workout, you can take it easy as the trail flattens out and meanders gently over this final little protrusion in the famous Rokko range. This area is actually a hilltop park, so you’ll find plenty of places to take a rest if tiredness is creeping in. Before too long you’ll reach the top of the ropeway which whisks slightlyless- energetic people up and down the hill. Feel free to ride it down, but after coming this far it won’t take long to descend the path back to civilisation and pop out at Sumaurakoen Station.

All in all, the walk will take about three and a half hours. Of course this route can be done in reverse, but after all that, who wouldn’t want to end the day at the beach? To do so, take a train one stop or walk for 15 minutes to join the crowds at Suma, where you can finally kick back on the sand with a drink or an ice cream, safe in the knowledge that you’ve thoroughly earned it. It turns out that Suma is more than just a sandy beach after all!

Itayado Station can be reached via the Sanyo Electric Line and the Seishin-Yamate subway line.