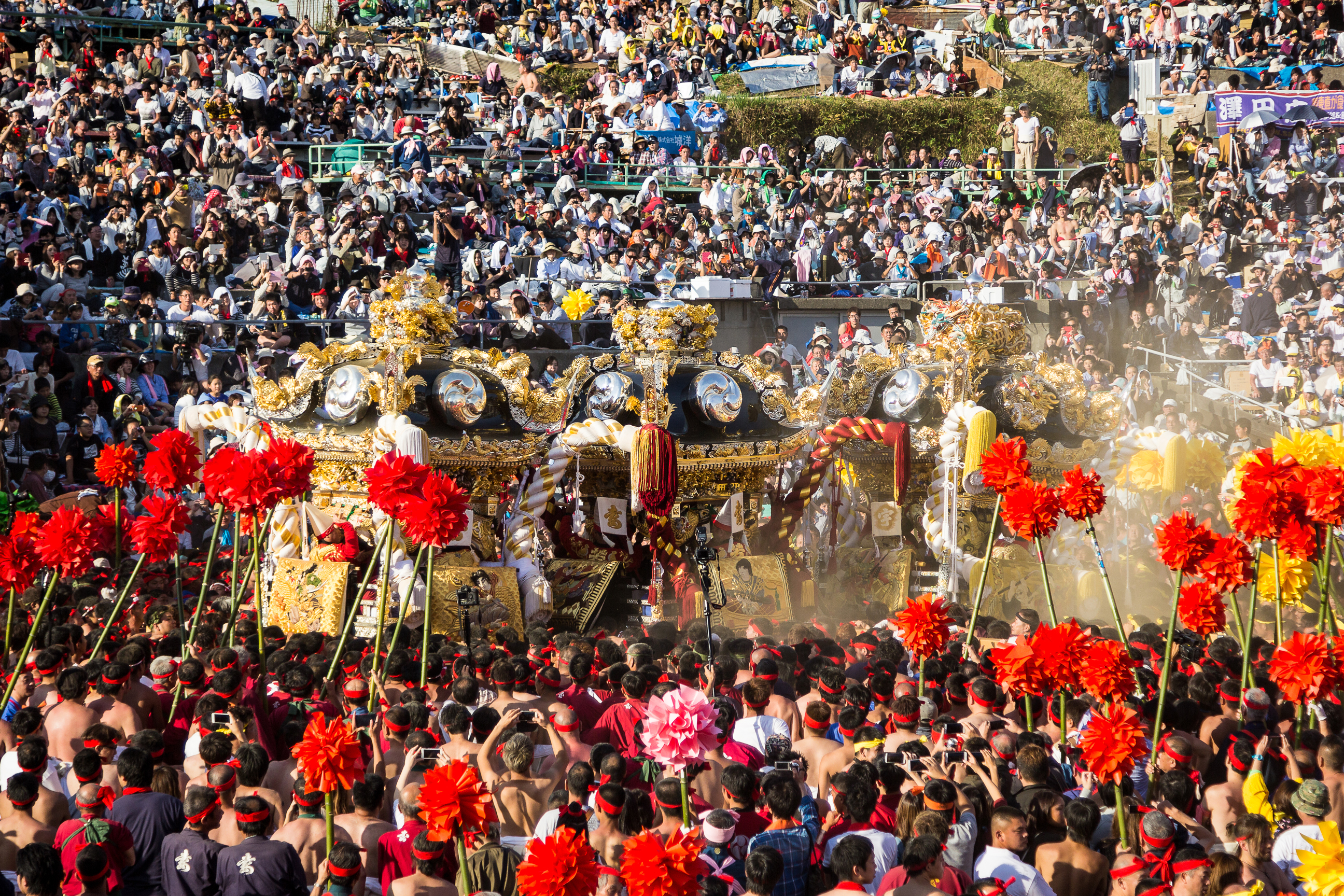 “Yoyasa! Yoyasa!” the fighters’ spurring chants echo through the crisp autumn air as wood cracks and splinters with each clash of portable shrines. At Himeji’s fiercest festival – the Nada no Kenka Matsuri (Fighting Festival) – spectators revel in watching groups of fiery men hoist palanquins onto their shoulders and crash them ferociously against one another. The aim is to topple opposing shrines and be the last one standing.

Held every year on the 14th and 15th of October at Matsubara Hachiman Shrine in the suburb of Shirahama, Himeji City, this two-day event is the largest of Japan’s fighting festivals, attracting over 100,000 visitors each year. The exact origins of this event have become somewhat lost to history, but one theory is that the crashing of the floats and palanquins mimics a great sea battle derived from the legend of Empress Jingu’s (169–269) military expedition to Korea. Regardless of the genesis of this Shinto festival, the significance is that the winners are blessed with a bountiful harvest, good fortune, and of course, bragging rights.

Men from the seven villages of Kiba, Matsubara, Nakamura, Mega, Usazaki, Higashiyama, and Yaka compete for this honor, dressed in only a fundoshi (loincloth), jika-tabi (split toe boots), and a colored hachimaki (headband) designating their local allegiance. Each color carries significance for the participants in this vivid festival: Green is the color of bamboo and power, red is fire that melts metal, orange is symbolic of sweat, vermillion is the color of passion, yellow represents noblemen, blue is the color of the ocean, and pink the color of peaches, which is said to ward off evil.

The main part of the festival where the shrine-crashing action takes place is on the 15th – the second of the two days. On the 14th, Shinto purification rituals are performed in preparation for the following day. Festivities begin at 11 a.m. on this day with neri-dashi when the yatai (large floats) of each village are lined up and paraded around to present them to the public. The float bearers make their way to Matsubara Hachiman Shrine to be purified with salt by a Shinto priest. When entering the gate of the shrine the top of the float is taken off as a sign of respect.

A unique aspect of the Nada no Kenka Matsuri is that both mikoshi and yatai feature throughout the event. Mikoshi are portable shrines and it is believed that the gods ride inside them. They are smaller and are expected to be broken during the festival, so they are much lighter than the yatai and their decoration is less elaborate. The yatai are the larger floats that glimmer gold and silver and have beautiful, elaborate, expensive decorations.

The events of October 14th are slower paced, allowing more time to appreciate the splendor of these massive yatai that cost millions of yen to build and maintain. Up close, you can see the finer details that are easy to miss in all the action on the second day of the festival. Silver and gold metal sculptures, intricate wood carvings of dragons, tigers, phoenixes, and other symbols of protection adorn the floats, along with silk embroidered curtains depicting scenes of Japanese folklore and legend. Each yatai houses four taiko drummers whose job it is to keep a steady beat (even while tipping over during the clashes!) to help coordinate the troops balancing the enormous float on their shoulders. The men walk the yatai around the grounds of Matsubara Hachiman Shrine to the cheers of the crowd, and do a mock clash with other yatai as a precursor to what is to come the following day.

The second and main day begins bright and early with Misogi, the Shinto ritual for washing impurities away with cold water. Each year, a different village is chosen to have the great honor of carrying the mikoshi into the icy waters of the Harima-nada sea to conduct the ritual for that year’s festival. The chosen village is known as having neri-ban, meaning it is their “off year,” and they won’t be fighting their big yatai float against the other villages. For their neri-ban year, they only take part in events relating to the mikoshi – the smaller portable shrines. Through the initial Misogi water ritual, they ready themselves for their holy task as carriers of the gods for a day.

A few hours later, mikoshi are brought to Matsubara Hachiman Shrine where the bigger yatai floats are undergoing their own purification rituals and subsequent parading around. This is where the first of the jousting begins and where the undercard before the main ‘fight’ takes place – an event known as mikoshi-awase. During mikoshi-awase, the neri-ban village (who are having their off year from jousting with yatai floats) kick off the fighting part of the festival by crashing three mikoshi together. Lifting the palanquins into the air with long bamboo poles, the men collide them with full force in the hopes of tipping them over. According to the locals, the harder they are smashed together, the happier the gods are. After the mikoshi are good and battered and the gods are pleased, they are carried away from Matsubara Hachiman Shrine and up to the second venue of the fighting festival – Otabiyama.

Otabiyama is a hilltop area with a large outdoor arena setup. While the festival is free for anyone to attend, the box seating is reserved for residents and families of the participants. However, it is not unheard of for friendly locals to invite visitors or tourists to sit with them and take in the spectacle. Despite its large size, this festival still retains an authentic and down-to-earth atmosphere. Locals are quick to share their snacks and sake, which flows aplenty for both spectators and participants. 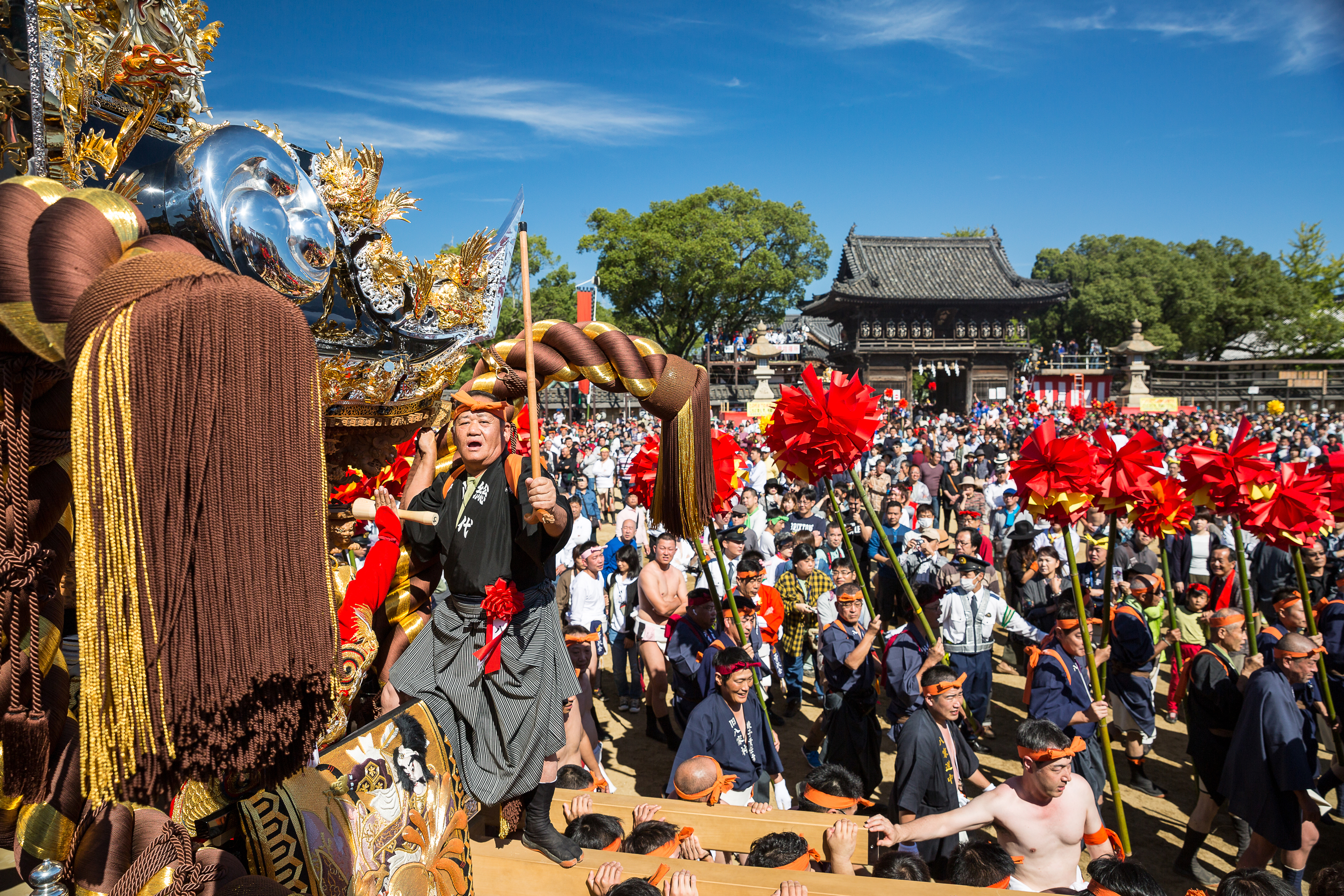 The climax of the festival is known as yatai-awase, where the incredibly ornate two-ton yatai balanced on the shoulders of hoards of men collide at full tilt. This is when the pandemonium truly begins. As might be expected in an event named ‘fighting festival,’ where there are no rules except to charge your two-ton float as hard as you possibly can into one, two, or even three other two-ton floats, things can get a little crazy. The fighting never gets completely out of control, but things can and do get heated at times, much to the delight of the crowd. It is common to see two yatai jostling for supremacy, bashing into each other with one casualty float crashing onto its side. Sometimes a third or fourth will join the party, kicking up dust as they ram into their opponents, sending them toppling over. Any team can jump in and challenge another at any time, making for exciting yet dangerous circumstances. While not common, deaths have occurred in past events.

The chaos carries on until sundown when the yatai are carried all the way to the top of Otabiyama. There, they are illuminated by hanging lanterns and then paraded down before the crowds once more. After the last of the jousting, one village is declared the winner, and the rest are left to lick their wounds. But the party carries on into the night with triumphant victors, languishing losers, and sloshed spectators gathering together for their last hurrah before dawn.