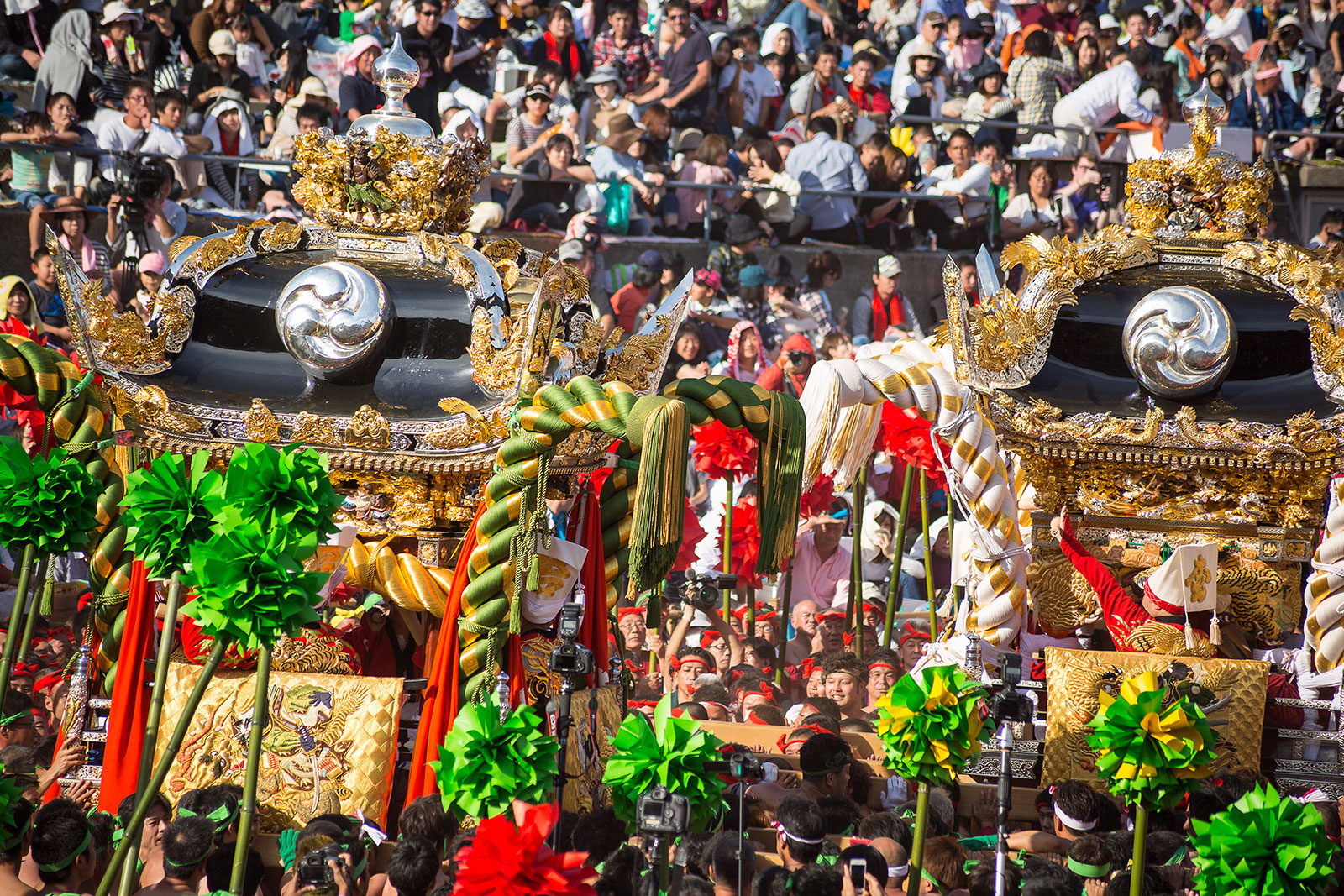 At Hyogo’s most action-packed festival—the Nada no Kenka Matsuri (Fighting Festival)—spectators revel in watching groups of revved-up men hoist palanquins onto their shoulders and crash them ferociously against one another. The aim is to topple opposing palanquins and be the last one standing.

Held every year on the 14th and 15th of October at Matsubara Hachiman Shrine in the suburb of Shirahama, Himeji City, this two-day event is the largest of Japan’s fighting festivals, attracting over 100,000 visitors each year. The exact origins of this event have become somewhat lost to history, but one theory is that the crashing of the floats and palanquins mimics a great sea battle derived from the legend of Empress Jingu’s (169–269) military expedition to Korea. Regardless of the genesis of this Shinto festival, the significance is that the winners are blessed with a bountiful harvest, good fortune, and of course, bragging rights.

Men from the seven villages of Kiba, Matsubara, Nakamura, Mega, Usazaki, Higashiyama, and Yaka compete for this honor, dressed in only a fundoshi (loincloth), jika-tabi (split toe boots), and a colored hachimaki (headband) designating their local allegiance. The main part of the festival where the shrine-crashing action takes place is on the 15th—the second of the two days. On the 14th, Shinto purification rituals are performed in preparation for the following day.

The climax of the festival in the afternoon on the 15th is known as yatai-awase, where the incredibly ornate two-ton yatai balanced on the shoulders of hoards of men collide at full tilt. This is when the pandemonium truly begins and it takes place at Otabiyama—a hilltop area with a large outdoor arena setup. The chaos carries on until sundown when the yatai are carried all the way to the top of Otabiyama. There, they are illuminated by hanging lanterns and then paraded down before the crowds once more. After the last of the jousting, one village is declared the winner, and the rest are left to lick their wounds. But the party carries on into the night with triumphant victors, languishing losers, and sloshed spectators gathering together for their last hurrah before dawn.

While the festival is free for anyone to attend, the box seating for the Matsubara Hachiman Shrine leg of the fights is reserved for residents and families of the participants. For the Otabiyama leg, it’s first in-best spot. Despite its large size, this festival still retains an authentic and down-to-earth atmosphere. Locals are quick to share their snacks and sake, which flows aplenty for both spectators and participants.