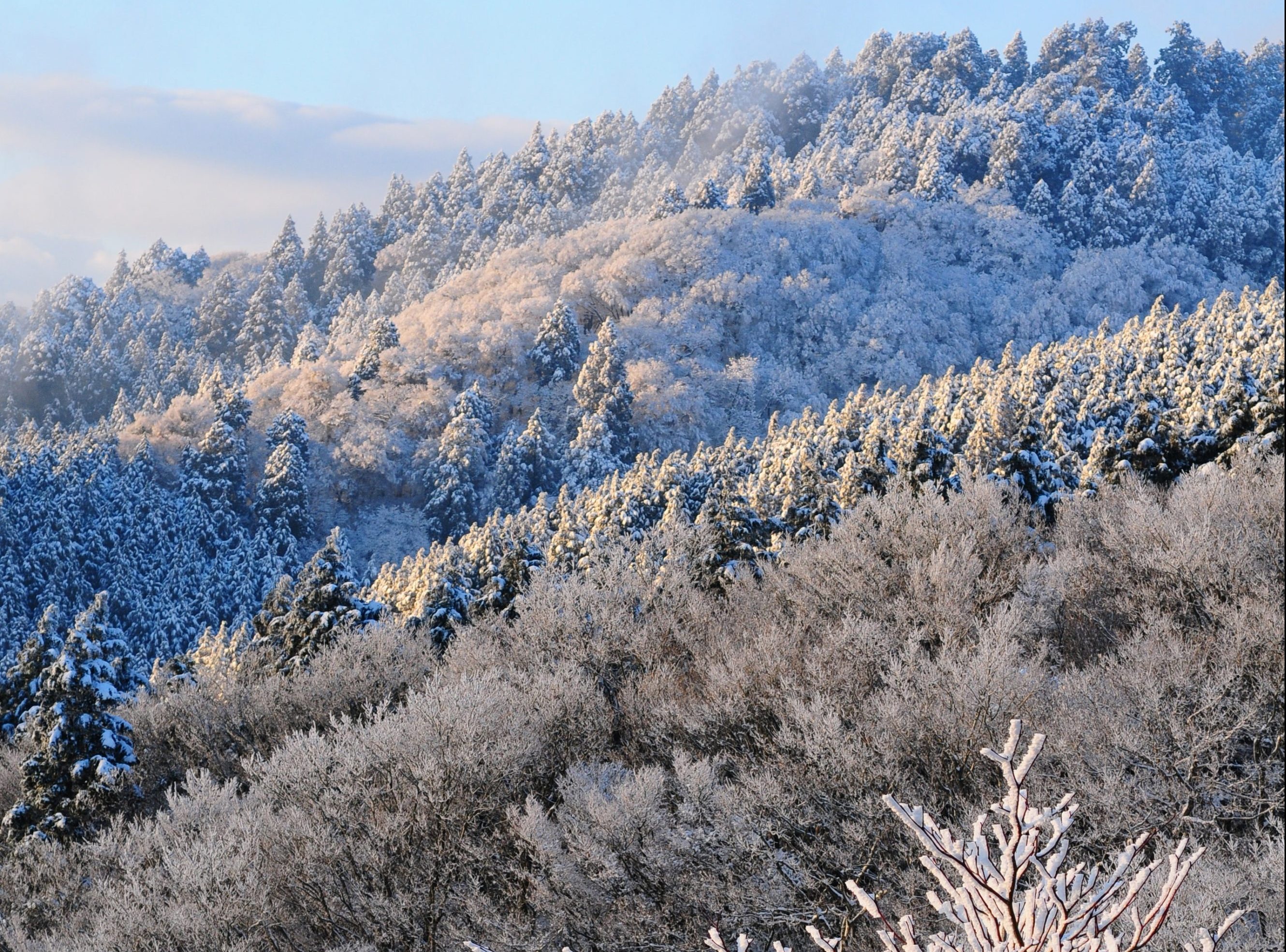 So rare is it to get more than the accidental few snowflakes falling in Kansai’s larger cities that urban dwellers in these parts could be forgiven for forgetting what a snowflake looks like! Luckily, however, you don’t have to venture far from Osaka, Kobe, or Kyoto to get a frosty fix this winter. Here are five picturesque locations around the region that almost always get a generous snowfall, particularly between New Year and spring.

Situated on the border between Osaka and Nara, Kongosan is the dominant peak in the Kongo Katsuragi range, yet has one of the easier mountain-hiking courses in Kansai. At 1,125 meters—the highest point in Osaka Prefecture—Mount Kongo is one of the most popular places to take in snow views in the region, as well as far-reaching views across Osaka Prefecture. Unlike on many other Kansai mountains in winter, you won’t be alone on the slopes. Lines of people queue up on weekends for buses that drop hikers at the base of the mountain from which you make your way up the wooden steps to the temples and shrines at the top. The main draw is the juhyo—trees glazed with ice—as well as the few inches of snow that lingers on the peak throughout the winter. It is a good idea to bring some small snow spikes or four-point crampons in case the paths are icy and slippery, and if hiking conditions aren’t ideal on the day, you can always ascend the mountain by cable car.

Access: Take the Nankai Koya line from Namba Station to Kawachinagano Station. From there, ride the Nankai bus for about 35 minutes to the Kongo Tozan Guchi bus stop.

As if the temple village of Koyasan isn’t mystical enough with its seemingly never-ending graveyard full of epic tombstones and towering ancient cedar trees that appear to reach up and brush the sky. But a night of snowfall at this spiritual Shingon Buddhist sanctuary and UNESCO World Heritage Site high up in the Kii mountains takes the mystery factor to the next level. The Shingon sect’s main temple Kongobuji and the moody Okunoin cemetery look all the more captivating with a powdery white coating. Pair a day trip to this fascinating town with a stay in one of the 120 temples, approximately half of which open their doors to visitors to stay overnight, allowing a glimpse into monk life and a chance to try shojin ryori (traditional vegan temple cuisine).

Access: Take a limited express train on the Nankai Koya line from Namba Station to Gokurakubashi Station where you change to the Koyasan cable car. 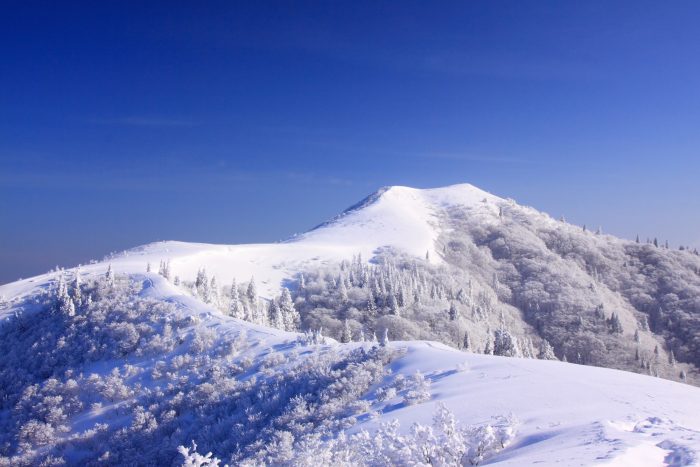 Another serene mountain location with a plethora of holy sites and peaceful forested pilgrimage trails, Kurama is especially alluring in the winter with its majestic frozen scenery.
The snow usually lingers much longer on the mountains that surround Kyoto, and it is not uncommon for peaks north of the city to be covered with a smattering of it for weeks at a time in the winter. The pearly white powder contrasts with rows of bright red lanterns lining the staircase to Kurama-dera temple for strikingly photogenic views. Under normal circumstances, you can trek tranquil snowy paths up over Mount Kurama and down to the village of Kibune, but the trail has been closed temporarily as a result of damage caused by a September typhoon. Until it reopens, traveling between Kurama and Kibune is an easy two-minute journey on the Eizan Electric Railway. At the end of a brisk day of exploring, head for the steamy rotenburo (open-air hot springs) of Kurama Onsen and soak your chilled bones in piping-hot cypress-wood tubs surrounded by snow-dusted landscaped gardens.

Access: Take a train for 30 minutes on the Eizan line from Kyoto’s Demachiyanagi Station.

Shiga Prefecture boasts some of Kansai’s highest summits and most striking mountain scenery, and those peaks are dumped with snowfall in the winter months as a result of cold air masses that drift down from the Sea of Japan. The lofty Mount Bunagatake to the west of Lake Biwa is the highest peak in the Hira Mountains and another top spot for white winter vistas. Trekking up this mountain in the snow is no mean feat, however, and should only be attempted by experienced climbers. The 1,214-meter slope has quite a steep approach from the tiny village of Bomura, from which it is a four-hour haul to the top. During winter climbs, most hikers come down the same way they went up, but there are several paths pulling off in other directions across the mountain, so there is a variety of options for adventure climbers. Regardless of whether or not you attempt a climb to the peak, the bus journey to Bomura offers sweeping views of the scenic snowcapped Hira range.

Another looming mountain, directly west of Shiga’s Mount Hiei on the other side of Kyoto City, is Mount Atago, the highest peak of the mountain range flanking the city. Unlike Hieizan, there is no ropeway to ride to the top, and the only way to get there is to climb the 924 meters on foot. Beginning at the sleepy hamlet of Kiyotaki, the approximately four-kilometer hiking trail snakes its way up the steep slope to a sacred shrine at the top. On this still, snowy landscape, the only sounds to be heard are ice crunching beneath your soles and clumps of snow falling off bare winter trees. The entire hike takes around three to five hours, but a warning that snow and ice can make winter climbing more difficult, so more time should be allowed to stay on the safe side. Leading up to the highest point, there is an open area with benches to relax on and take in panoramic views of Kyoto.

Access: Take a bus from Kyoto Station to the village of Kiyotaki.

• Inform someone of your plans, including route, times, distances, and so on.
• Wear warm layers including gloves, scarves, beanies, and thermals as well as durable waterproof footwear.
• Pack a thermos with a hot drink, detailed maps, a GPS device, and a flashlight or headlamp.
• Set off as early in the day as possible and plan for early nightfall. Sunset in winter months starts at around 4:45 in the afternoon.

Carving the Kansai Slopes
Kinosaki: A Hot Spring a Day