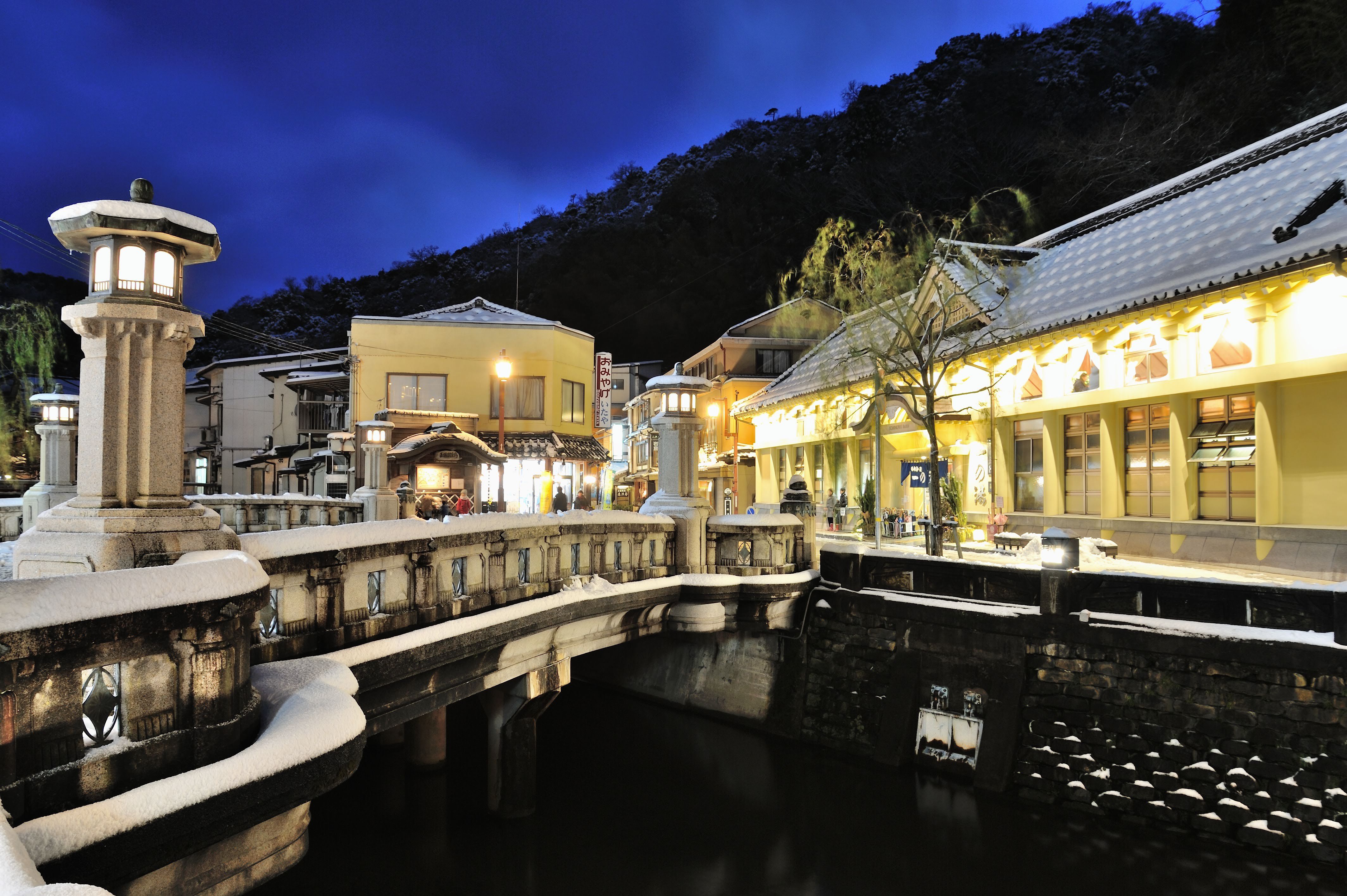 They say an apple a day keeps the doctor away, but in Kinosaki, they substitute apples for hot springs, boasting a restorative onsen for every day of the week. Like so many beloved Japanese locales, there is a nostalgic origin myth attached to Kinosaki Onsen. As the legend goes, back in the Asuka period during the seventh century, an injured Oriental white stork landed in the marshes of the area and healed its wounds. Many years later, bathhouses were constructed over these sites to make the curative waters accessible to people, and this is when the oldest onsen in the town—Kouno-yu, or ‘stork bath’—was built. 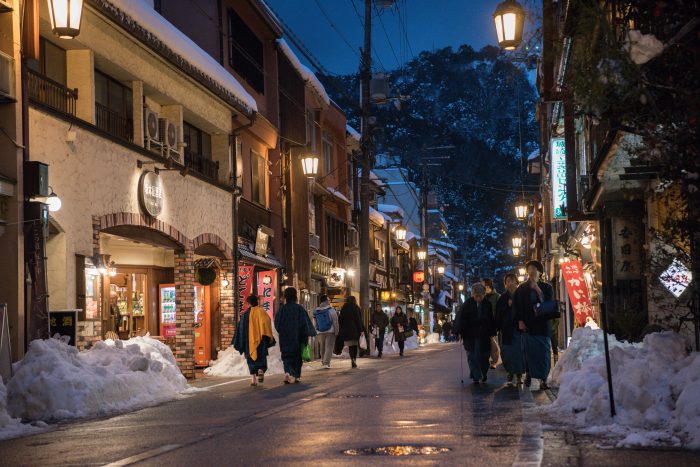 There are now many hot springs dotted around this quaint canal village in Hyogo Prefecture lined with cherry and willow trees and teeming with traditional wooden ryokan (inns) with their own private onsen. The most famous, however, are the seven public baths esteemed for their remedial properties and promises of good fortune (bathing in the healing Kouno-yu, for instance, is said to bless your marriage with happiness and longevity). The water is rich in sodium, calcium, and chloride, a blend purportedly ideal for alleviating muscle and joint aches, digestive disorders, and skin conditions. People have been coming in droves to bathe in these cherished springs since the Buddhist priest Dochi Shonin first brought attention to them during the eighth-century Nara period.

Spread out between Kinosaki Onsen Station and the base of Mount Daishi, a few hundred meters from one another, bathhouses can be reached on foot, with Kouno-yu being the furthest from the station—about a 15-minute walk. Depending on where you stay, however, it may take longer to make your way to the famed stork bath while getting about in geta (traditional wooden clogs).

One of the little things to love about staying in a tranquil Japanese onsen town is meandering the picturesque narrow laneways in a cotton yukata (bathrobe), white tabi socks, and slip-on geta that are provided at inns and guest houses. What would normally be the equivalent of walking the streets in pajamas suddenly becomes the norm while in historic Kinosaki, and there’s something therapeutic about being forced to slow down while moseying along in the clunky sandals, hearing the echoing click-clack with each step. There are even public foot spas on the lantern-lit streets where you can slide out of your wooden slippers and soak your weary feet. If you fancy, you can dip a mesh bag of onsen tamago (hot-spring eggs) in the steamy water, boil them, and eat them on the spot. 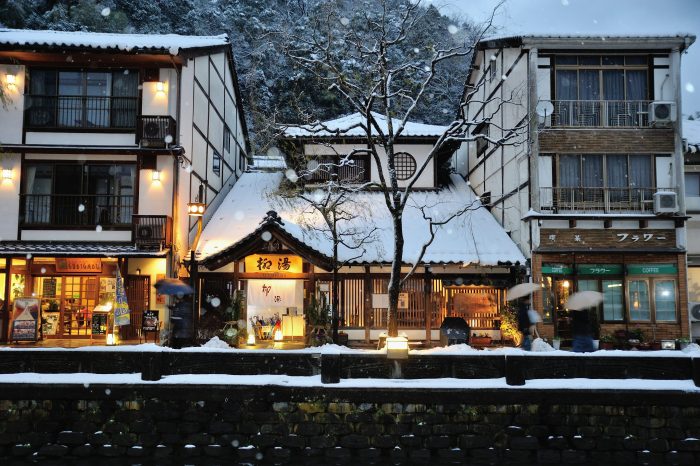 [Onsen hopping]
There are seven public baths to take a dip in, including this one, yanagi-yu, said to promote fertility and safe childbirth.
Photos: © Toyooka Tourism Innovation

Kinosaki locals encourage visitors to think of the entire town as one giant ryokan. In fact, anyone staying at a local inn can use Kinosaki’s seven public bathhouses for free during their stay with a special pass called a yumepa provided by their accommodation. Many guests even skip their ryokan’s onsen in favor of a sotoyu meguri (bath stroll), roaming around gazing at the classic architecture and trying out the town’s most renowned hot springs. 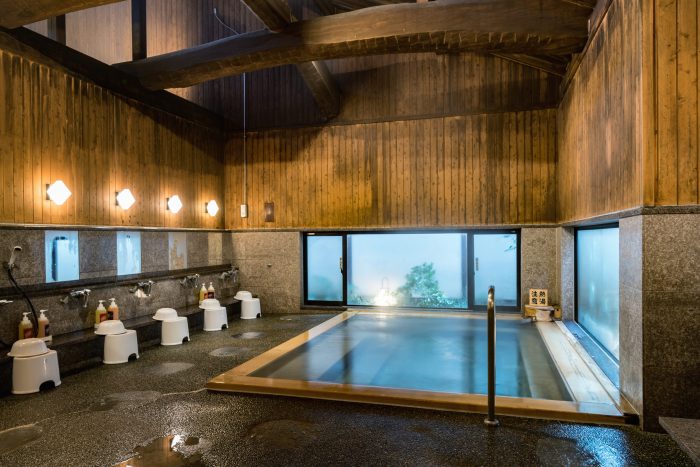 Satono-yu, situated nearest to the train station, is the largest of the town’s bathhouses with a huge variety of indoor and outdoor baths as well as waterfalls, mist rooms, and saunas. The male and female sides switch daily between Japanese and Roman style.
Hours: 1pm–9pm • Closed: Mon • Entry (without yumepa): ¥800

Jizo-yu is designed to resemble a Japanese lantern and is named after a Buddhist deity that watches over children. Its waters are believed to bestow safety and prosperity on families. This onsen features high ceilings and a contemporary interior. Private family baths can be booked for ¥3,000 per 40 minutes.
Hours: 7am–11pm • Closed: Fri • Entry (without yumepa): ¥600

Yanagi-yu (‘willow bath’) is the town’s smallest public onsen with the hottest water and is said to promote fertility and safe childbirth. It is built from cypress wood and has a traditional atmosphere. There is a small {ashiyu} (foot bath) next to its entrance.
Hours: 3pm–11pm • Closed: Thu • Entry (without yumepa): ¥600

Ichino-yu is the lucky bath thought to bring success in school and safety while traveling. The photogenic, Momoyama-style building echoes the grandeur of a {kabuki} theater and features an outdoor cave bath. Private family baths can be reserved for ¥3,000 per 40 minutes.
Hours: 7am–11pm • Closed: Wed • Entry (without yumepa): ¥600

Goshono-yu (‘imperial palace bath’) is one of Kinosaki’s bigger bathhouses whose architecture was inspired by the Kyoto Imperial Palace. The bath areas and sauna feature large windows that look out onto waterfalls. Outdoor bathing areas are made from natural boulders with underwater seats to sit on and take in the lush scenery.
Hours: 7am–11pm • Closed: 1st & 3rd Thursday of the month • Entry (without yumepa): ¥800

Mandara-yu is the only onsen situated away from the main road of Yunosato Dori. Often said to be the most attractive of the public baths, Mandara-yu offers a very serene hot-spring experience. The waters of Mandara-yu are believed to bring prosperity in business and agriculture.
Hours: 3pm–11pm • Closed: Wed • Entry (without yumepa): ¥600

Kono-yu is situated near the entrance to the ropeway that goes up Mount Daishi. It features an outdoor bath with a view of the surrounding forests and is said to bring good luck for a long and happy marriage.
Hours: 7am–11pm • Closed: Tue • Entry (without yumepa): ¥600 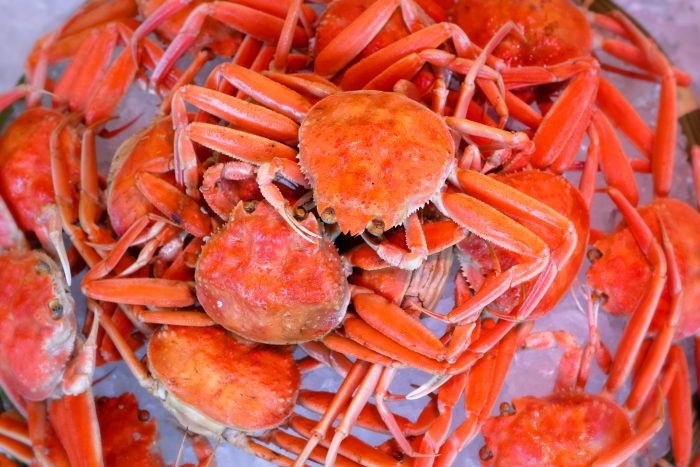 When layers of icy sleet or even mounds of powdery snow line Kinosaki’s canals, icicles freezing to the twigs and branches of bare winter trees, you know you have arrived in the hot-spring haven during the snow-crab season. Kinosaki has a long, proud tradition of delectable crab (kani) cuisine and winter in this town is bliss for seafood lovers.

Many of the ryokans offer exquisite kaiseki (Japanese haute cuisine) multi-course crab meals, which are works of edible art, but there are also several top-notch seafood restaurants around the town to choose from. Matsuba crab is the local name for the male snow crab harvested from the Sea of Japan and its plump, sweet flesh is served steamed, raw as sashimi, or even grilled at the table in front of you. Crab hot pot is a standard as is crab sushi and tempura. The fullest flavors, though, come from the kani miso delicacy—crab innards pounded into a miso-like paste and often served in the main body of the shell.

For any non-seafood-lovers, Kinosaki has another prized local specialty in its Tajima beef. Kobe beef, considered the highest quality in the world—known for its tenderness, rich flavor, and high-density marbling—refers to cuts from specially selected Tajima cattle. Choose from tasty steak, curry, stew, and deep-fried cutlet sets, or sukiyaki and shabu-shabu hot-pot courses. Local chefs will even wow vegetable lovers by working culinary magic with obscure roots and greens like fox turnip, kogomi (fiddlehead ferns), and butterbur. Vegetarians and vegans appreciate the fresh fruit-and-vegetable smoothies at Kinosaki Juice Saika and thoughtful plant-based meals at Cafe & Bar 3rd near the station.

You can travel to Kinosaki Onsen Station via limited-express JR trains from Kyoto, Osaka, Kobe, and Himeji. The Japan Rail Pass and Kansai Wide Rail Pass are valid on these routes.
Visitors who do not stay overnight can purchase the yumepa ticket for ¥1,200, which provides unlimited admission to all seven public baths on one calendar day.
The ticket can be purchased at any of the bathhouses.
visitkinosaki.com

Onsen Etiquette
• Consider visiting the temple Onsenji to say a prayer before bathing. In the past, it was customary to do so to give thanks to the Buddhist priest Dochi Shonin who first brought attention to the springs during the eighth-century Nara period.

• While onsen-hopping, don your yukata, tabi socks, and wooden geta and bring a small and large bath towel provided by your accommodation. (Ensure the left side of your yukata is on the outside with the right side tucked underneath it, or else you’ll be dressed for a Japanese funeral!)

• No clothing or bathing suits should be worn inside the bathing area, and be sure to thoroughly wash your body using the shower facilities before entering a hot-spring pool.

• Although all 7 of Kinosaki Onsen’s public baths allow tattoos, they are frowned upon in many other Japanese onsen. Thus, it is best to cover any tattoos with a plaster or bandage before entering the bathing area.

• The small towel given at your accommodation is meant for drying off when leaving the bath. You can place it folded on the top of your head like the locals do or leave it nearby, but make sure it doesn’t fall in the water as it is considered unclean.

Kansai’s Glistening Snowy Scenes
The Wrestlers Are Back in Town