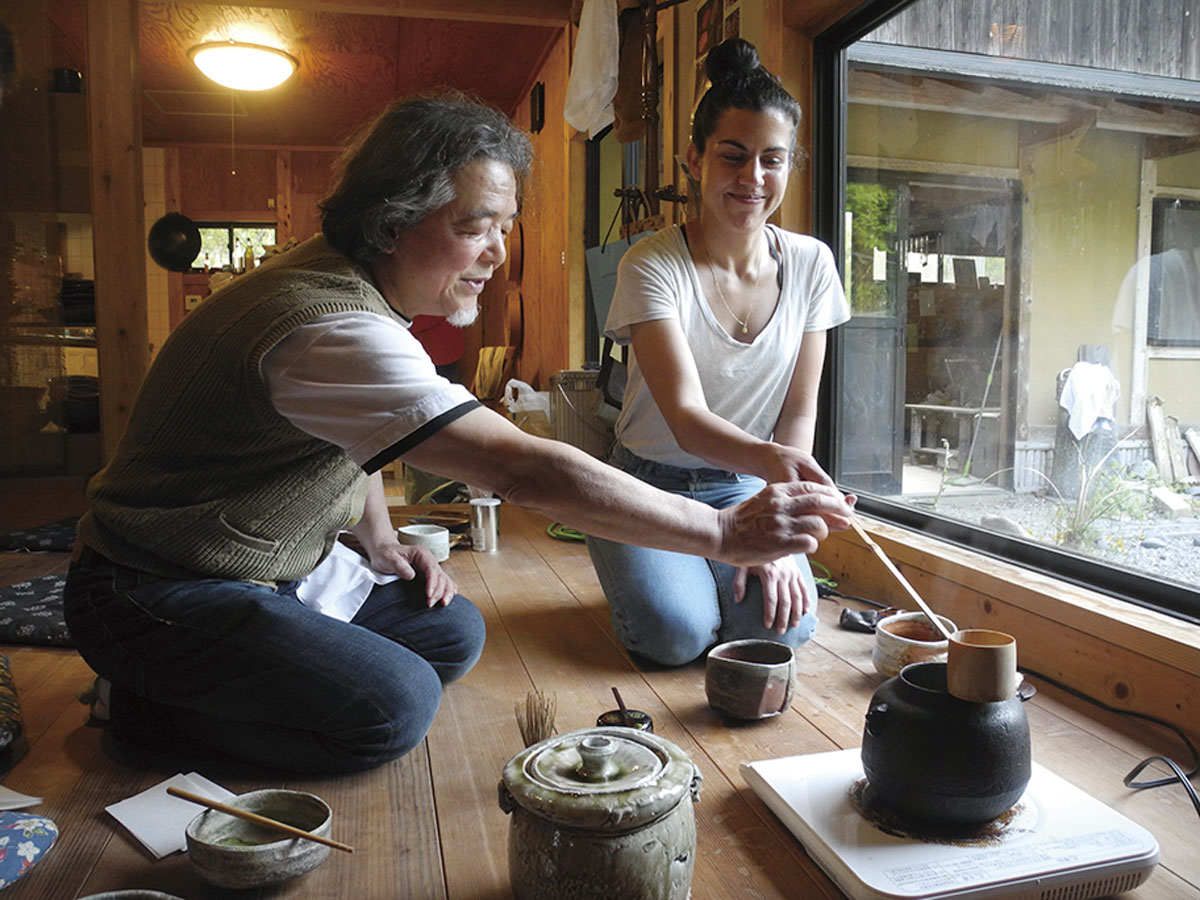 In an idyllic corner of Tamba Sasayama and perched on a gentle slope overlooking two hamlets of a dozen households, John Dix’s studio is almost a world unto itself.

Having studied pottery in Greece, Israel and the US, John moved to Japan in the late eighties and soon began apprenticing with a local maker of Bizen ware (originating from Bizen in Western Honshu, which one of the so-called ‘Six Ancient Kiln’ towns alongside Tamba). Some years later, local residents of Tamba and editors of what used to be Kansai Time Out magazine, David Jack and Sachiko Matsunaga, approached John with the idea of building a pottery studio on their plot of land. With their support, Dix also constructed an impressive, traditional anagama kiln, which is fired to approximately 1,300°C using wood as the only fuel. The firing process, which takes up to a week, is necessary for creating the aesthetic effects that typify many Japanese pottery styles.

Dix’s work draws on a number of regional pottery traditions—including those of Tamba, Iga and Bizen—and demonstrates a deep knowledge of his craft. He runs seasonal workshops where students live at the studio, make pottery with exceptional Japanese clays and try their hand at firing the anagama kiln.

How has working in an off-the-beaten-track studio influenced your work with clay?

Japan is a mecca for potters from around the world, but it can seem a bit impenetrable for those visiting from abroad for the first time. I am one of few foreign potters in this area.

When David, Sachiko and I planned the studio, it was with the understanding that it would be more than just my own workspace, but a facility that would offer outsiders the opportunity to experience ceramics in Japan in a way that might be difficult elsewhere. We have hosted hundreds of people, and many have stayed long-term.

A nice thing about our studio’s location is that, while it feels really secluded and tranquil, it’s close to the center of Sasayama, and just over an hour to Osaka or Kobe.

For those who have never heard of anagama, how would you describe the Japanese-style kiln?

The anagama is the original, high-temperature kiln. It is simply a hole—ana in Japanese—dug out of a clay mountainside. It is also inefficient, taking many days and huge amounts of wood to reach the required temperature.

Anagama firings produce highly unpredictable results. The pieces go in ‘naked,’ or unglazed, and the kiln does all the work. Over many days, copious amounts of ash from the burnt wood is deposited on the pieces and then melt into a kind of glaze when the desired temperature is reached. Each piece comes out differently. I don’t know of another art that demands so much physical effort, only to surrender the final decorative process to the fire gods!

What makes anagama firing so popular among potters these days?

Over the centuries, kiln technology developed, but the anagama never lost its popularity in Japan because of the unique and appealing surface decoration created by the ash deposits.

In today’s world where you can operate an electric kiln with your phone, the anagama is a throwback to another time. It also brings people together. To chop all the wood, load the kiln and keep it burning for up to seven days takes a team with the common goal of firing this ancient tool. The reward is pots like no other.