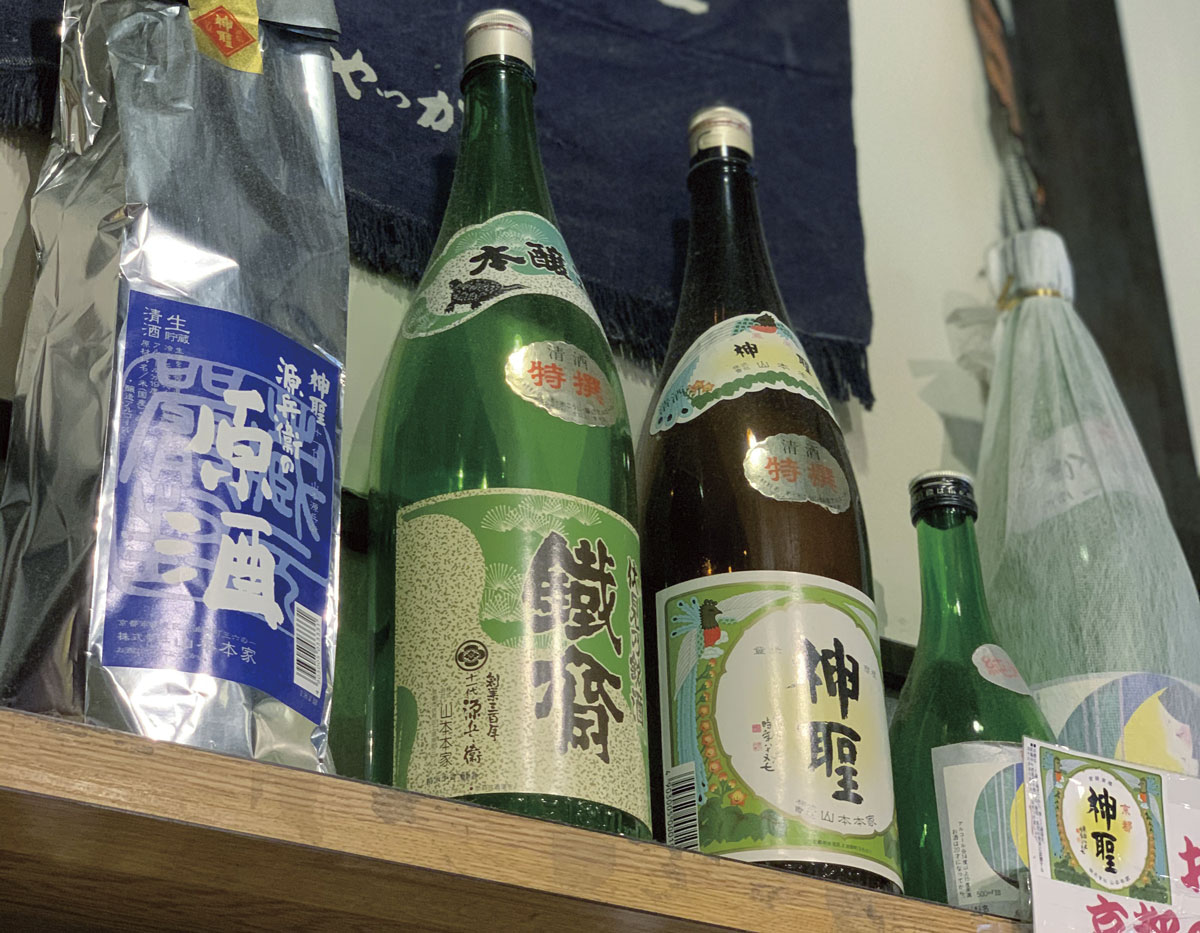 Kyoto may be home to innumerable historical sites and time-honored traditions, but one of the city’s greatest assets—unbeknownst to many visitors—lies beneath our very feet. It sits on a vast water table believed to match the size of Lake Biwa, Japan’s largest, which supplies water to 14 million people. The tasty, mineral-rich water that emerges as trickling springs, has served a number of industries well over the centuries. One business that can attest to this is Yamamoto Honke, one of the oldest breweries in Kyoto’s southern Fushimi sake rice wine-making district. Yamamoto Honke draws its water from a well on the premises, which has not changed location once over its 300-year history. They and the neighboring breweries refer to their local spring by the poetic name of shiragikusui, “water of the white
chrysanthemum.”

Founded in 1667 by Genbee Yamamoto, Yamamoto Honke has continued to concoct delicious sakes under eleven generations of toji master brewers. Genbee Yamamoto also happens to be the name of the brewery’s current toji. He is proud of how well their sakes pair with a wide range of foods, and attribute it in no small part to these miracle springs. The mineral composition is just right, he insists: potassium and calcium is present, but not to the extent that inhibits the fermentation process. It also lends their brews a pleasant, mellow aftertaste.

Yamamoto says that the brewery has always sought to connect its sake to Japan’s cultural legacy, even in the tearoom. What does sake have to do with tea, you ask? The formal Japanese tea ceremony begins with kaiseki. This is a simple meal consisting of small seasonal dishes accompanied by a bowl of rice and soup, served to “prepare” the stomach for the tea. During this meal, the guests and host also share a bottle of sake—a measure that was as much about safeguarding oneself from being poisoned as fostering a sense of camaraderie in less peaceful times—pouring for each other. And so Yamamoto Honke created the Matsuno Midori series, featuring an elegant yet earthy aroma that complements the clean and simple flavors of the tea ceremony meal.

Yamamoto Honke is also eager to bring sake back as a favorite during the hanami cherry-blossom viewing season, where beer and other mixed drinks have become mainstays. For Japan’s farmers, the blooms mark the start of the planting season for the rice paddies. Cultivating rice—the primary ingredient of sake—is back-breaking work, and just as the blossoms serve as a morale-booster for farmers, so sipping from a cup of sake is a kind of gesture of solidarity and gratitude for their toil. Some sake brands go as far as to pepper their brews with petals as a marketing ploy. But Yamamoto feels such gimmicks will only go so far. Consumers have also become more discerning, and while in the past they may have paid little attention to what was on the label, quality and artisanal techniques are becoming ever more important—with that, a sense of heritage goes hand-in-hand.

Yamamoto has decided to stay small-scale to adapt to the needs of the market, focusing on its high-end varieties, such as its successful Shinsei brand. In fact, almost all of its 5,000-bottle-a-year output consists almost entirely of junmai ginjo and daiginjo—where a higher percentage of the rice is milled in a more costly process that yields a more refined brew (and, in the case of the junmai, omits the addition of brewer’s alcohol). While it is true that overall sake consumption in Japan continues to decline, Yamamoto is convinced this approach will reap benefits in the long run.

“People ask me whether there are times I wish I were doing something else, but I have never once felt that way,” says Yamamoto, “I enjoy it and enjoy seeing my colleagues enjoy it too.” It is this personal passion for the craft to which he ascribes the longevity of the company and, should the master continue to have his way, the brewery will continue to delight customers for generations to come.

Kanpai Jorei
On January 15, 2013, the city of Kyoto became the first municipality to introduce a city ordinance promoting local sake, a kanpai jorei (“toast ordinance”), to increase awareness of sake’s part in Japanese culture and enjoyment of it—i.e. making it the drink of choice for toasts kicking off various types of events. While the ordinance varies by municipality, with some districts choosing to emphasize their own local beverages such as wine, shochu and even milk, it was originally enacted to counter the decline of sake consumption around Japan.