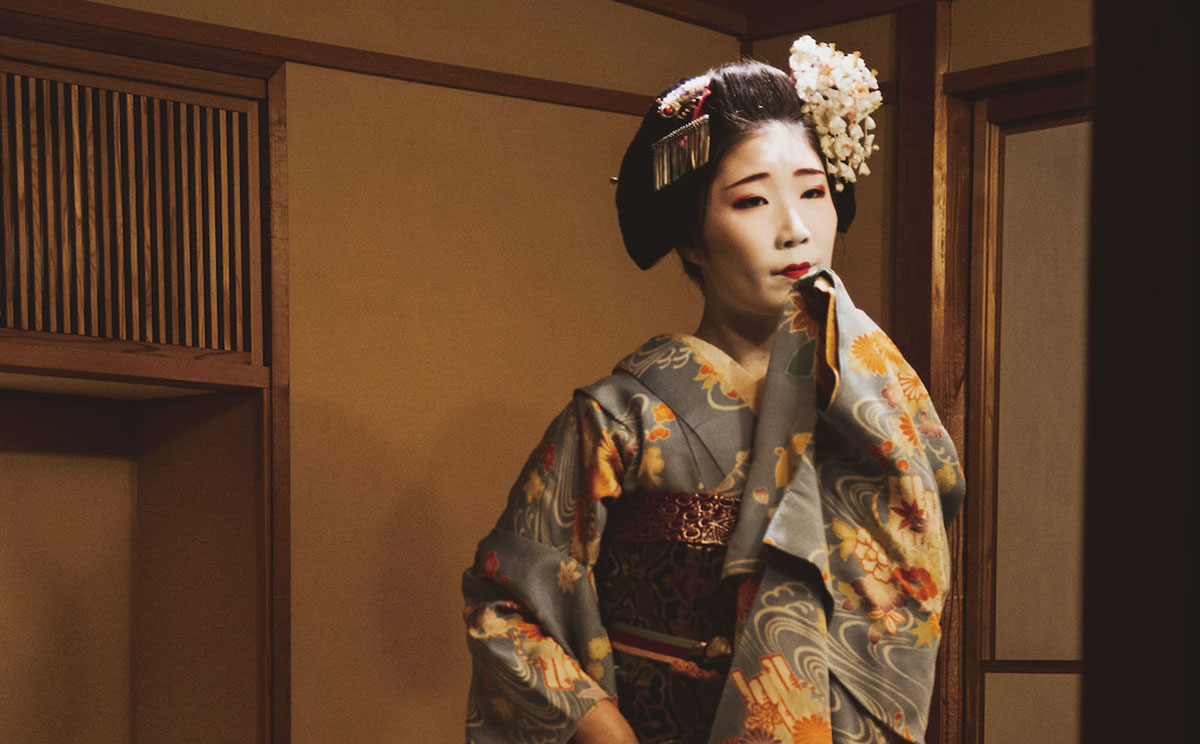 Visitors to the Gion district of Kyoto will know when they have stumbled across the flagstone-paved Hanami-koji Street, for it is brimming with smartphone-wielding tourists snapping the façades of the polished ochaya teahouses—the venues where the elusive geisha entertainers work (and sometimes live). The geisha world is exclusive, and simply stepping into one of these teahouses without an invitation from an existing patron is out of the question, so most of these tourists can merely hope to catch a glimpse of these ladies during their time in Kyoto—either transiting from rehearsals in the daytime or performances in the evening. Fortunately, though, geisha encounters are becoming easier to arrange for newcomers than they were in the past. One company, Exclusive Kyoto, is offering foreigners the chance to experience a reception with a maiko apprentice and engage in conversation without needing to worry about the language barrier and, because they cater only to small groups, the usual time constraints. I have come to Hanami-koji myself to witness one such gathering.

My destination lies on one of the tiny alleys leading off this bustling stretch. The red lanterns outside the old wooden houses bear the symbol of the district: a string of eight dumplings, harking back to the days when these teahouses would serve such treats in front of temples and shrines. I wonder whether I have taken a wrong turn down this maze of streets, but our host Yukari arrives promptly and with a smile ushers me inside the polished renovated interior of one of the ochaya.

I am led upstairs to a spacious tatami-matted room where Experience Kyoto’s customers, a couple from the US are waiting excitedly for their distinguished guest to arrive. Yukari takes us through the evening’s proceedings so we know what to expect. We can tuck into our sushi platter whenever we choose, she says, adding that drinks are free-flowing. With gin and tonic in hand and ensconced in our comfortable sofa-chairs, we are all feeling remarkably relaxed. I wonder: Aren’t these things meant to be formal?

The moment our guide announces the maiko-san will be joining us shortly, the anticipation is palpable. Like school kids awaiting the arrival of the headteacher, we sit bolt upright in our seats. The fusuma door slides open, and with dainty steps, she enters the room. The first part of the evening commences with a traditional dance. Her intricate pale blue silk kimono with hand-painted flowers paired with black and gold obi sash embroidered with the family crest flows with her controlled movements, showcasing every angle of her outfit, make-up, and hair. Kimono are not merely garments but also a kind of signboard for the occasion and season. As she spins, the long streaks of white paint tracing her neck indicating her status of maiko also become apparent. This marking creates the illusion of an elongated neck and was once a sign of beauty among women in premodern Japan.

Still entranced by the performance well after the music has stopped, our guide enters the frame again to introduce us to Yuriha and explain the young maiko’s garb. At 19 years old, Yuriha is nearing the end of her grueling five-year apprenticeship period and will become a fully-fledged geisha (or geiko, as they are called in Kyoto). Our guide translates Yuriha’s softly spoken Japanese. Formally introducing herself, Yuriha hands us her hanameishi business card, only there is no number or address—just a name and that of her okiya geisha residence. Her name, she explains, is not the one she was born with, but one that she has had since becoming a maiko. The last character was given to her by one of her geiko sisters, which she thinks of as a great honor. While Yuriha didn’t have a choice over her name, she did choose the design on her card: a small rabbit. Her meticulously-painted face erupts into a broad smile and a soft giggle at this moment the cute little rabbit seems an especially fitting choice.

Yuriha is proud of her art and her maturity belies her young age. Pouring us sake rice wine, she comes to each of our tables and patiently answers our many burning questions. She explains that she is one of just 70 maiko working in Kyoto today, while numbers of geiko stand at around 200. We are eager to find out about her decision to forgo high school and to become a maiko—and live with nine other maiko in an okiya residence just across the street from where we sit. I ask her about her work, does she receive a salary? Who are the artisans who help create her look? Will younger generations help geisha traditions survive into the future? Then the big one: is she happy?

While she knows it will be hard once she graduates and becomes independent, she is happy, she replies with a genuine smile. We giggle over some shared observations, and fuss over her obidome—the iridescent antique jewel fastened to her sash, made up of precious stones and pearls. She quips that in the event that she trips over on her sandals, her hands would be shielding the jewel rather than breaking her fall. Intrigued by her hairstyle, we gasp at the revelation that it is all her own hair and not a wig! Coiffed only once a week, her hair is adorned with an elaborate floral ornament known as hana kanzashi. This, like kimono, is reflective of the seasons. In April, the kanzashi of choice is sakura cherry blossom, the most beloved of Japanese blooms.

We move on to the final part of the evening: game time! We each take turns trying to beat Yuriha at konpira fune fune, a simple game with a sweet song that proves to be very entertaining, we all let out raucous laughs. The rules are easy, with players taking turns to tap a little box with an open palm. If a player removes the box you must tap the table with a closed fist, played to the simple rhythm of Yuriha’s singing. The defeated takes a small sake from the maiko.

Flushed from the sake, we pose for photos with Yuriha before bidding farewell. Seeing the delighted faces of Yuriha’s customers is heartwarming, and I leave with the feeling that, even with the hardships that becoming a geisha entails, there are perhaps few jobs out there that are quite as satisfying.

Sake Sensei
Summer in the “Land of Water”