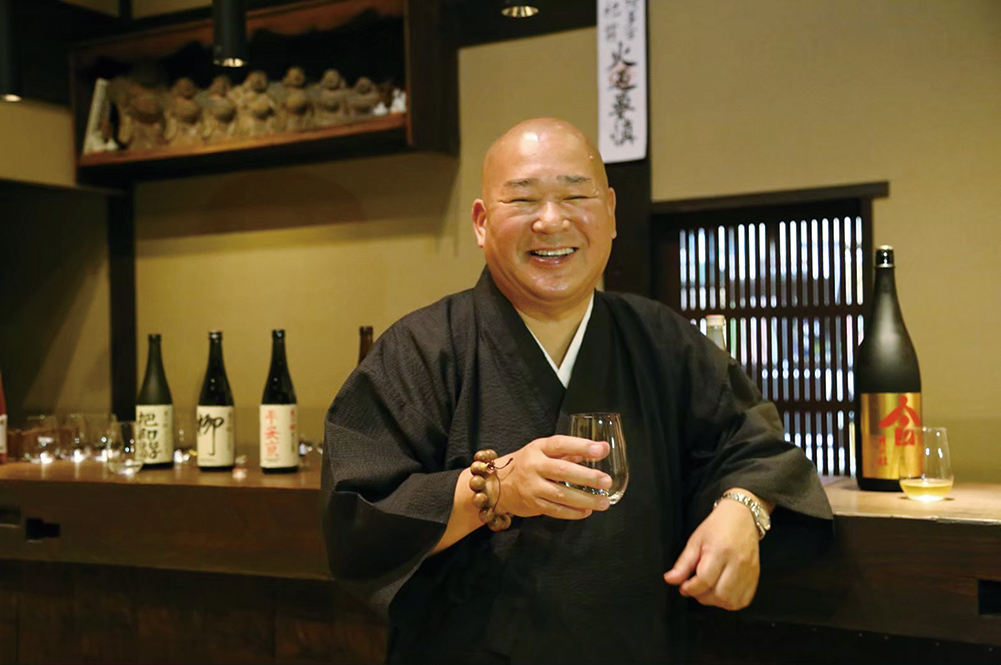 Kansai Scene’s resident Sake Sensei, Rakudo Yoshida is far more than just an avid sake enthusiast. Formerly a coach of the martial art, Shorinji Kempo, and a practicing Buddhist monk, by day he works as a nurse and laughter therapist at Shiga General Hospital. He is active in the local community, helping sufferers of alcoholism (—yes, he sees the irony) as well as speaking at prisons where he helps inmates find their way back to the straight and narrow. His free time spent dabbling in the entertainment world, with occasional appearances on TV and in various local films, Mr. Yoshida is one busy man!
Despite his hectic schedule, we caught up with Sake Sensei in his hometown of Uji in Kyoto to talk about what makes nihonshu so special and how he came to love Japan’s national drink.

Julian Houseman: What made you discover sake in the first place?

Rakudo Yoshida: Well, like many, I had bad experiences with sake when I was young. When I coached Shorinji Kenpo at Kyoto University, I would go to the pub with other students and there would be ridiculous drinking games. Of course, this led to horrific hangovers and an overall bad impression of sake. It wasn’t till my thirties that I came across Kubota Senju [an enormously popular sake in the eighties from Niigata-based brewery, Asahi Shuzo and still widely available]. Just a sip of that sake was a revelation! Who knew sake could be so aromatic and flavorful? It wasn’t that harsh stuff I was used to. This led me to discover jizake, small-batch sake made by artisan breweries.

JH: What kind sake do you find yourself drinking most these days?

RY: Well, I live in Kyoto so obviously I am surrounded by great local sake. I like a bit of sake from Shiga where I was born, but I mainly drink Kyoto sake. I drink it chilled for the most part, but there are some sakes that really open up when you warm them.

JH: What should people look for when they’re in a sake bar?

RY: If you don’t know any brands or can’t read the menu, ask for something refreshing (sukkiri) or light, clean (tanrei). I wish there was more sake in hotel bars! It surprises me that hotels in major cities catering to foreign tourists often only have one sake at the bar. People come here to experience Japan. They should promote sake more instead of whisky and cocktails.

JH: What do you think makes sake special compared to other alcoholic beverages?

RY: Sake goes with any kind of food. Some people like to drink without food, but I always like to have some nibbles on hand. Sake rarely clashes with food—Japanese or Western—though it may lose out to excessively richly flavored ones. This sets it apart from beer or wine, where matching possibilities are narrower.

RY: I think it would have to be sashimi. It goes perfectly with sake. But I also like mentaiko (cod roe) and funa-zushi (fermented sushi) from Shiga. If I were to eat some steak or something fatty, I’d recommend koshu (aged sake). It handles the richness of charred meat and fat better than lighter sake.

JH: You mention that sake is for sipping as opposed to guzzling. Does this tie in with your work with helping alcoholics?

RY: Around 45% of Japanese don’t possess the enzyme to effectively break down alcohol in their system. Many young people start with canned chuhai, which tastes like juice, but with an alcohol content as high as 9%! That together with the peer-pressure is a dangerous mix! It’s important to try and change the drinking culture here. No one is savoring quality alcohol at sunrise! Drink better quality sake, appreciate and savor it.

JH: Sake is basically made of four ingredients: rice, yeast, water and koji mold (also used in soy sauce and many Japanese fermented foods). There are many different opinions out there, but what do you think is the main driving ingredient?

RY: Difficult to say, but perhaps water. You can get rice from anywhere, but the water in each region is uniquely different and that can be the defining quality of sake. For example, Kyoto has soft water; which lends itself to the softness and high drinkability that Kyoto sake is known for.

JH: Tell us a little about the Japan Sake Society?
RY: JSS is a gathering of sake enthusiasts, who started getting together about three years ago to discover and learn more about sake. We visit breweries, have tastings and dinners, and we try to share our love of sake with a wider audience.

JH: Have you heard much about how breweries have been coping with the COVID-19 situation?
RY: It’s tough for them. I know of breweries that are selling sake for as low as 20% of its regular price. People drinking sake at home helps, but it isn’t enough to keep breweries afloat. They need the sales that come from people eating out and drinking in bars and izakayas.

JH: What do you think is a common misconception about sake?

RY: Too many people think of sake as something harsh, alcoholic and nasty. It really isn’t. I firmly believe sake is for sipping and savoring, not for drinking games and the like. If you get the chance to go to a small-scale brewery and actually see these people making sake, it’s quite humbling; they really put their heart and soul into it. I don’t believe in saying a certain sake is bad; perhaps it just doesn’t suit your palate. There are many different types available so it’s worth trying a few to find a sake that speaks to you.

Sake Sensei
Rakudo Yoshida is Chairman of the Japan Sake Society and has devoted the past 41 years of his life to supporting—and enjoying—Japanese sake, its brewers and associations. He also happens to be a certified laughter therapist.

Continue Reading
Advertisement
You may also like...
Related Topics:Brewery, Sake