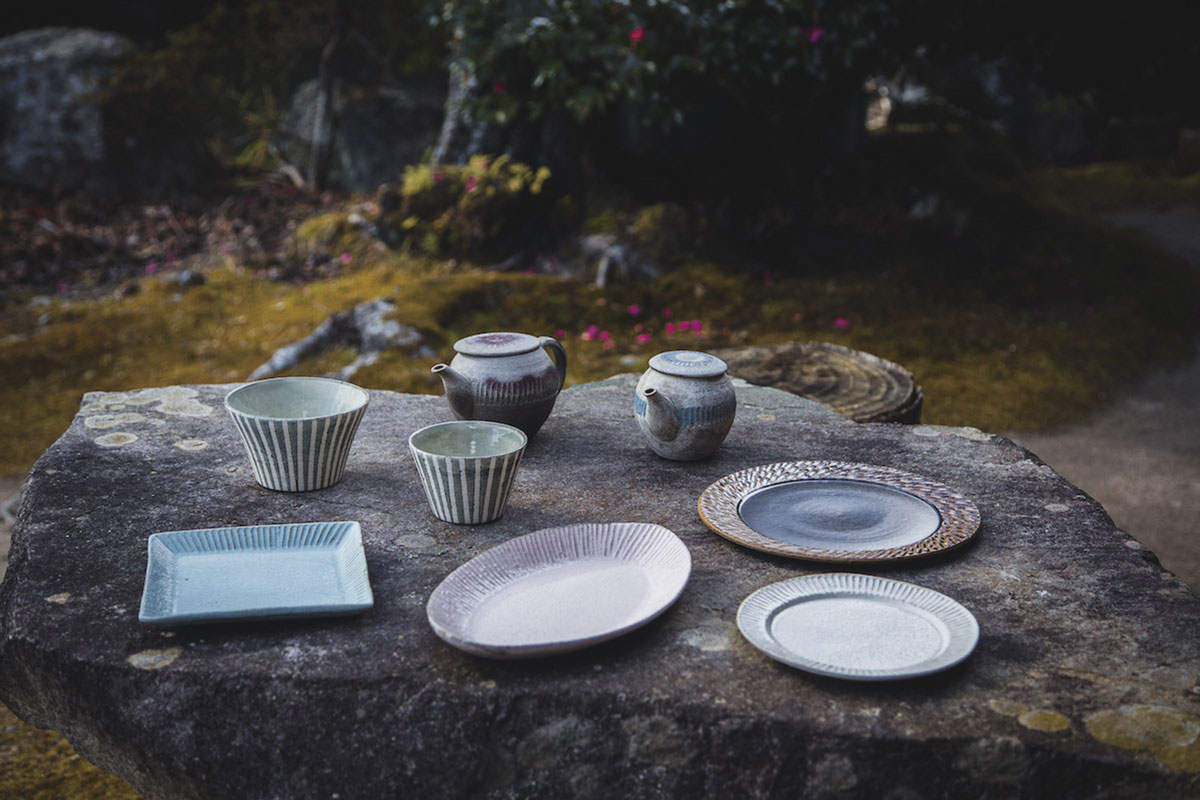 As we drive along the winding country roads of Tamba Sasayama, evidence of one of Japan’s oldest, thriving ceramic cultures is everywhere. The rural landscape is peppered with pottery studios, and I count nearly ten as we meander past fields and rice paddies. I also notice a long, multi-chambered climbing kiln, called a noborigama, snake across the mountainside.

Known as one of the “Six Ancient Kilns of Japan,” Tamba’s native style of pottery, known as Tamba ware, can be traced back almost nine centuries. Its rustic simplicity and natural glazes made it a favorite among commoners and the nobility alike for everyday use, and later sometimes appeared in the tea ceremony as well. Visitors to the area can gain insights into both the historical context of the craft and its contemporary developments through its museums, galleries and workshops where many Tamba ware ceramicists also offer classes. You can also browse the wares of these local artists conveniently brought together under one roof at Tachikui Sue no Sato Pottery Village. Not far away is the oldest traditional kiln still in use in the area, the 47-meter-long Saiko no Noborigama, built in 1895 and still fired during the yearly spring Haru Monogatari festival.

The Museum of Ceramic Art’s idyllic hillside setting with stunning panoramic views of the surrounding mountains and woodland. In front of the modern building are two large pools of water, with elegant rain chains hanging from the tiled roof. This museum is the perfect place to delve into the rich history of Tamba ware and Japanese pottery as a whole. To understand the developments that Tamba ware has undergone over the last 800 years in more depth, I drop into the permanent exhibition of ancient Tamba pottery on the first floor. This gallery defines three main periods of Tamba ware development, starting with the utilitarian origins of Tamba’s most ancient pots. The gallery then goes on to demonstrate the experimentation in style and technique that occurred in the following 400 years, and the resurgence that the genre enjoyed with the Arts and Crafts Movement in the early 20th century. A selection of works by contemporary Tamba potters show how they have embraced this long tradition of innovation. The museum’s special exhibition this spring will move away from Tamba ware, focusing on the pottery of Okayama’s Bizen region, characterized by the distinctive markings created by wrapping pieces in rice straw before firing, among other techniques.

One potter at the forefront of a new artistic blossoming of Tamba’s pottery culture is Ichino Katsuki. He is the seventh generation in his potting family, and he works with his father out of a workshop called Tokatsugama. He has been working on the project in collaboration with eight different potters, Tanba Style, to bring Tamba ware to a wider audience. Each potter brings his own flair to a collection of western-style tableware. Alongside his work with Tanba Style, Ichino has also been running a popular pottery class every month for over twenty years.

As I pull up at Ichino’s studio, the class is already in full swing and the sizable studio is buzzing with energy. Young children and grandparents alike are sat at tables. Some use pottery wheels, while others sculpt with their hands. The atmosphere is bright and cheery with laughter ringing through the room. Students choose their own project and work independently, while Ichino buzzes around the studio to correct their technique. The projects range from a delicate bowl covered with pointed petals, to a chunky figure of beloved children’s cartoon character, Anpanman. One of Ichino’s students, Mr. Honda, shows me his project with pride. He has been making a variation of the same abstract sculpture for the last few years. He tries to change the style a little each time, but this one, he tells me, is one of his best. He has added small spots of glaze around the piece, which shimmers under the light.

As I chat with Mr. Honda in the small garden behind the workshop, Ichino comes out to join us. The class has come to an end, and now it is time for coffee and sweet red bean soup. The coffee cups are all made in-house by Ichino and are reminiscent of the older rustic styles of Tamba pottery. Ichino pours himself a cup and settles down on the carved wooden bench as his students move indoors, laughing and joking together. Ichino smiles fondly as the door shuts behind them. “The pottery class is less about me teaching students at this point,” he explains. “Some students have been coming here for over twenty years, so I suppose we’re more of a family.” The feeling of comradery and the affection that the students have for Ichino is obvious.

Ichino considers himself more of an artist than an artisan. After training in Tokyo, he decided to return to Tamba and take up his position as the head of his family’s workshop. Moving back to his hometown was no hardship though. He embraces the natural beauty of the area and delights in the community of students he has created. Hearing Ichino talk about the classroom is a delight, and his face lights up when he talks about his student’s projects. He wants to give people an opportunity to improve their skill, but also to meet people along the way. “I want to bring people together,” he tells me, “and in my opinion, pottery is one of the best ways to do that.”

As the sun starts to set and we bid farewell, I see a young girl holding up her first sculpture with a toothy grin. It’s lumpy and a bit uneven, but to her it is clearly one of the greatest treasures she has ever held.

Tokatsugama pottery class
First Sat of the month 10am-1pm
Fee: From ¥2,500 inc materials and firing
Reservation required.
Visitors are encouraged to wear comfortable casual clothing or an apron that they don’t mind getting dirty.
Tel: 079-597-3050
www.eonet.ne.jp/~toukatsu/

Try your hand at Tamba Pottery!

No chance to visit Tamba during your stay in Osaka? Head to the Hankyu Grand Building in Umeda for a special one-off class with one of the old kiln town’s resident potters. Suitable for all levels and with English-language instruction.

During this 3-day event celebrating the best of Tamba Sasayama’s creativity and fresh, local produce, many pottery studios are open to the public and workshops suitable for all ages. With a large outdoor market, live music, art exhibitions and tea tastings, there is plenty for the entire family to enjoy.