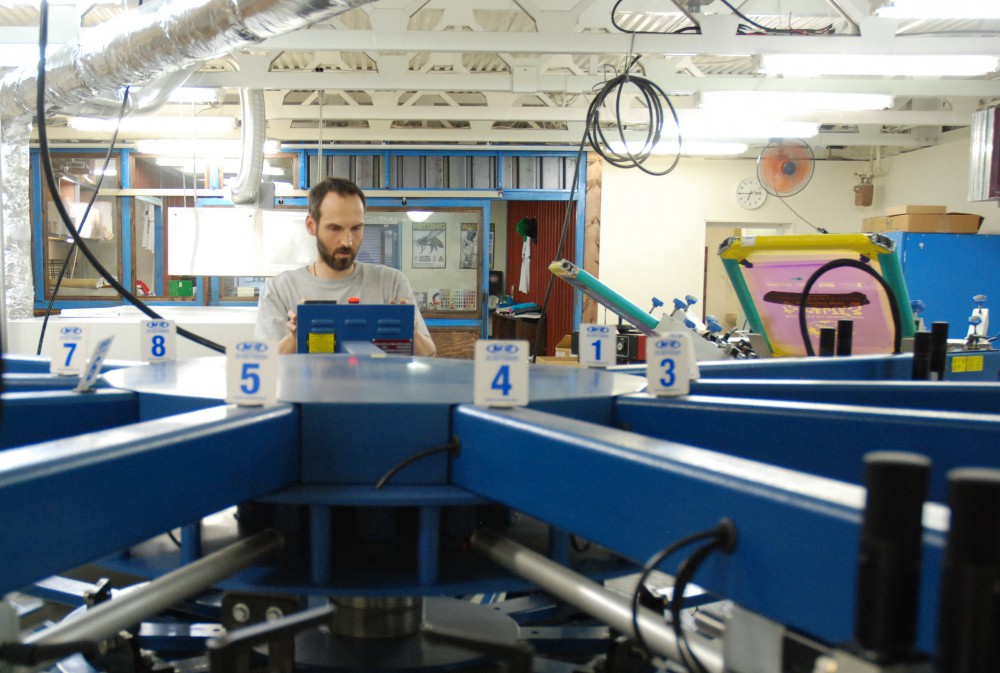 Matthias Schneidewind and his wife Miyuki set up their T-shirt printing business, Sweatshop Union, back in 2005. After seven years at their Horie location, they’ve recently invested in new machinery and a bigger premises. Kansai Scene caught up with them at their new workshop in Sakuragawa, Osaka.

Matthias: Back in the 90s, I travelled to London a lot for the drum & bass clubs and ended up staying. I was offered a job at a T-shirt printing company called Photofit. It wasn’t really an apprenticeship, they just threw me in the deep end and I was printing T-shirts from day one. After five years I’d learned everything I needed to know and was ready to go it alone.

KS: Where did you meet each other?

Matthias: I was working in a cafe-bar and Miyuki came in as a customer. I was pretty rude to most of our customers (laughs).

Miyuki: I was taking some time out from a hairdressing job in Osaka and was friends with one of the cafe’s owners.

KS: Why didn’t you set up a shop in London?

Matthias: It was an idea, but simply too hard logistically. We also had two small children by that time, and with their future education and well-being in mind, we decided to head to Miyuki’s hometown, Kobe and make a go of it in Japan.

KS: Did you get any support from the local government as a new small business?

Matthias: When we started, we had a little start-up cash saved up from our time in London and together with some help from Miyuki’s parents that was enough to get us going. We only approached the local government for a loan this year, to fund our expansion.

Miyuki: At first I approached the shokokaigisho (Osaka Chamber of Commerce and Industry) for advice. They recommended we apply for a government kokkin loan (offered by the Japan Finance Corporation) but said any loan would be subject to approval of a business plan. Once we had submitted that it was relatively painless process and the super low interest rates offered by the government are great. Just 2 percent or something like that.

Matthias: I was surprised by how much we were able to borrow.

KS: Who are your customers?

Matthias: We take orders from all over Japan, but mainly the Kansai area. I would say 70% of them are Japanese. Bands, schools, sports teams, embassies… everyone and anyone really.

KS: Ever had any famous customers?

Matthias: Back in London we used to print T-shirts for the illustrator Pete Fowler and Firefox. Here in Japan we have done shirts for some local comedians, and the Tokyo-based artist Alex Gelman.

Matthias: Neckties. We printed some limited edition ties for a Tokyo boutique. They brought in the semi-finished material and we printed their design for them.

KS: What’s the concept with the interior?

Matthias: I had always wanted to have a shipping container-inspired workshop, but the last space wasn’t big enough to do that. I wanted a kind of retro-industrial feel with straight lines and hard materials, but offset by natural wood. I came up with the ideas but Guido from Gearhead Studios made it happen, and added his own touches too, like our T-shirt shaped mailbox.

KS: What else do you print on besides T-shirts?

KS: Are all your T-shirts screen printed?

Matthias: Yes, but we can also do digital heat-transfer which is an affordable way to reproduce complicated full color artwork and actually the only way to print on caps.

KS: How long does it take from start to finish?

Matthias: Our typical turnaround is 10 days, but we can do shorter turnarounds for those in a hurry. Our automatic press means we can turn large jobs around in no time at all.

KS: Can any artwork be made into a T-shirt?

Matthias: Theoretically, yes. You can print shirts with up to 20 individual colors or use simulated process printing. Basically you can give us any full color artwork, photograph etc. and by using special software we can separate the design into the necessary channels/screens for printing – ending up with a minimum of six colors. The best T-shirt designs are the simple ones though.

As for colours, you can print your shirts in any colour imaginable, including fluorescent and metallic inks or even metallic foils. We mix the colors based on Pantone swatches or buy in colors to match. We print exclusively using eco-friendly organic inks, approved by the Australian Soil Association.

KS: Can people bring their own shirts for you to print on?

Matthias: Absolutely, though we charge a small fee for it. Otherwise, we have a massive range of shirts available to choose from.

KS: You did a special T-shirt fundraiser for Tohoku last year. What happened?

Matthias: After watching those terrible scenes on TV, I just wanted to do something to help. Printing T-shirts is what I do best and seemed the best way to help. So I contacted the graphic designers I know and asked them to contribute original designs. We printed the shirts and sold them on our website with all profits going to the Japan Red Cross.

Miyuki: We sold just under 500 shirts in total. Most of them were sold to people overseas, with many buying several shirts at once. It was a great response.

KS: When you’re not printing T-shirts, where do you escape to in Kansai?

Matthias: We usually go back to Kobe so Miyuki’s parents can see the kids. The harborland area of Kobe is always a good place to be on a day off.

Miyuki: Restaurant-wise there are some great places around our old workshop in Horie. Monjiro for fantastic yakiniku, Yo for yakitori and Horie Teppan Bar for tapas-style food.