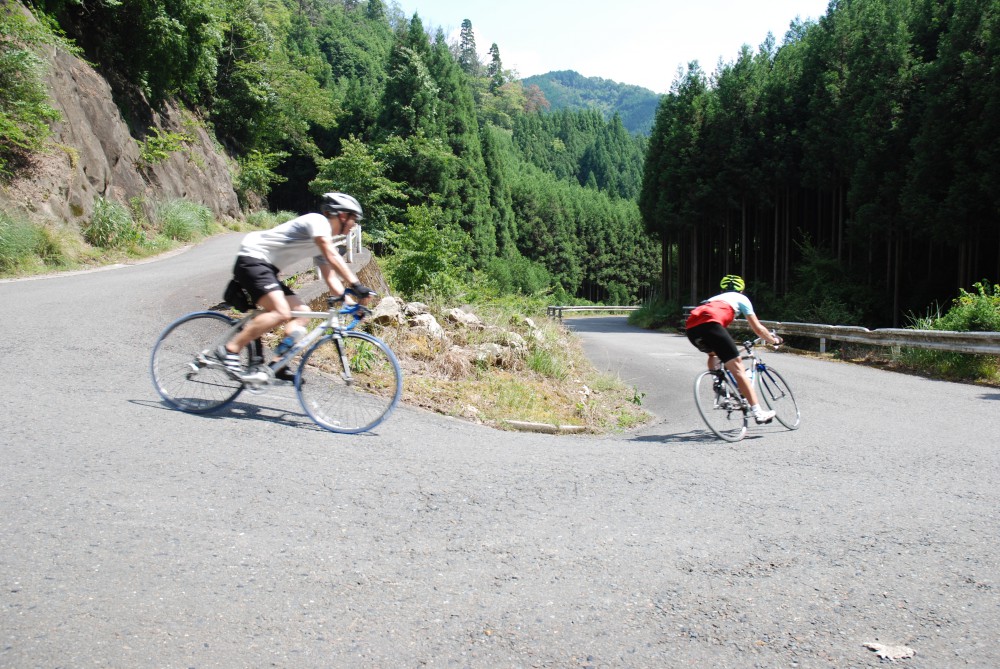 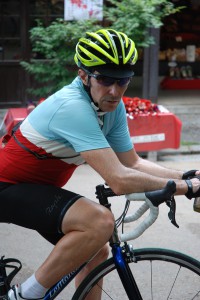 There are no windows in the lock-up, but through the gloom we can make out at least a dozen bikes. There are more frames suspended from the ceiling, a set of shelves overflowing with spare parts and various tools poking out of boxes. This is not your average bike shed. This is Vincent’s bike shed.

Vincent Flanagan is our guide today. He’s agreed to take KS on a short ride into the hills north of Kyoto. A former pro mountain biker (having been crowned both the Australian and Japan national champion) and long-term Kyoto resident, he knows a thing or two about bikes and where and how to ride them.

We begin our ride on the towpath along the Kamogawa river, heading north from Demachiyanagi station. The path is narrow and sandy, with little dunes forming at the edges. No problem if you ride dead center, but riding abreast, I am forced to tackle the dunes and the going gets a little hairy as the wheels stick and threaten to topple me at any moment. Vincent notices my discomfort and suggests going faster to compensate.

“If you slow down you end up losing control. That’s when you fall off. Go faster through the sand and you’ll be fine”.

I reluctantly take his advice but am glad when we shoot back onto smooth road. We cross the river and head through a maze of back streets to reach the small but perfectly formed Radio Bagel shop for breakfast. 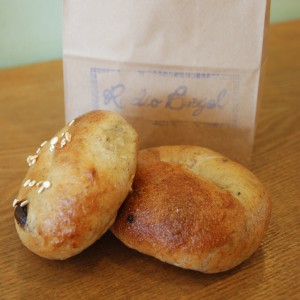 There is an unwritten lore amongst cyclists apparently, that a good ride starts with coffee and ends with coffee. Nursing a hangover and having leaped on a train at 8am without breakfast, I wasn’t going to argue. Radio Bagel produces the most delicious bagels I think I have ever tasted. These freshly baked rings were a world apart from the bland, chewy things masquerading as bagels I have had before.

Vincent is a regular and introduces us to the cheerful owner. She chats away about her bagel business as she prepares our coffee and pulls a fresh batch from the small oven. One fig bagel, one blueberry bagel and one hot cup of coffee later and we are off again but not before Vincent shoves a bagel into a pocket in his cycling jersey. “Perfect cycling food” he says.

We scoot down tiny lanes and side streets before hitting a main thoroughfare. “The thing to remember about finding good cycling roads is that there is usually a quiet road running parallel to a busy road”, says Vincent as, case in point, we dart down a street running parallel to the busy route 367, heading to Ohara. There is very little traffic and it’s easy to talk.

“Rivers too”, he continues. “There is always a quiet route to be found running next to a river”.

My thoughts turn to the enormous Yodogawa in Osaka. Its bike path, while at first glance a welcome oasis from the busy traffic of the city, is made infuriatingly impassable for cyclists due to the frequency of small steel gates. Designed to prevent motorbikes getting through, they succeed only in putting off cyclists altogether.

“I used to try and commute into Osaka along the Yodogawa, but due to those damn things I gave up. But I discovered a way to beat them. I saw some other riders barely slow down and ride right through them. I thought to myself, if they can do it, I can do it! You just have to put your knees together against the crossbar and ride with level pedals right through the gate. You have to be committed though…”

I half-heartedly practice the position but then grimace at the thought of the consequences should I get it even slightly wrong. I vow never to try it.

We soon find ourselves following a river, winding along rural roads and all the while gently climbing. We cycle past throngs of people gathered besides the clear running waters, bathing or picnicking in the mid-summer heat.

Suddenly we veer off the smooth road and crunch onto a rocky path heading into woodland. We scramble up over a ridge and find ourselves thrust down a sharp descent that gets steadily more precarious as we go. Vincent assures us this is a shortcut. Our grips stiffen on the handlebars as we struggle to maintain control, dodge the larger rocks and try to stay upright.

“Are you out of your comfort zone?” he asks with a grin. The grim look on our faces tells him the answer. This is not pleasant. We’re worried we are going to puncture.

“The thing to remember about punctures”, he begins, “is that we never talk about them!”.

Miraculously none of us do puncture, despite all riding on narrow, not-designed-for-off-road-riding tyres. We emerge onto smooth roads again and pass the entrance of the Yase cable car that offers hikers an easy ride to the top of Mt. Hiei. 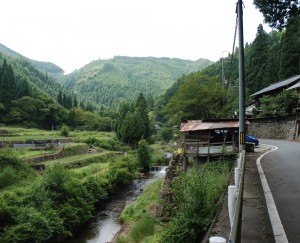 “They used to allow bikes on the cable car. It was great. Guys would take their downhill bikes up and then ride back down the mountain and do it all over again. The authorities soon killed it though, by demanding that you had to put any bike into a bike bag, knowing full well that those kind of bikes simply don’t fit in a bag. Fun while it lasted.”

A short stint on the main Route 367 and we arrive in Ohara. We take a breather at the Sato-no-eki and refill our bottles with Pocari Sweat from the vending machine.

Ohara is famous for its temples and red shiso. It has both in abundance. The shiso gives umeboshi its distinctive pink color and the temples of Sanzen-in and Jakko-in are a major tourist draw. Tour buses fill the car parks during the autumn, particularly when the maple leaves turn a fiery red, but today, in early-August, everywhere is eerily quiet.

We criss-cross the valley and check out the temples, stopping to engage an inquisitive pickle vendor who thinks Vincent may be my dad.

At 50 years old, he would have had to have reached fatherhood at 13, but we chuckle about it as we leave Ohara.

Vincent is no stranger to leading groups of riders. When he isn’t working at the Rapha Store in Osaka or busting a lung training for the winter cyclo-cross season, he leads small groups from overseas on cycling holidays. He supplies and maintains all the gear (which explains the overflowing bike shed), plans and leads the routes, books the accommodation and acts as chaperone.

“Currently I work with tour operators from Australia and the UK but I would like to set up tours for the domestic market too. There are so many great rides to show people.”

We are climbing steadily again and our bottles are running dry. Vincent pulls over by the side of the road next to a freshwater spring pouring from a bit of plastic guttering and promptly dunks his head, hat and all into the bucket beneath.

“Best fill up your bottle” he says, “no vending machine for the next 20km.”

We do as we are told and ride on. “Ramps up a little just here” he informs us, “what I call a cheeky climb.”

No more slouching in the saddle. This is a stand-up-on-the-pedals climb. We do our best to keep up with him but Vincent tackles it like a walk in the park, almost dancing on the pedals. The cicadas cheer us on as we push hard to keep the wheels turning, the sweat streaming down our faces. Vincent is waiting just before the crest of the climb with camera in hand and a grin on his face. I put on my best ‘doesn’t hurt’ face as I puff past.

“I use this hill to test any riders I take out” he says. “See if they know how to ride a bike or not”. I’m not sure how we fared. He is barely sweating. His heart rate monitor displays 120 bpm. I don’t have mine on today, but I know from experience that it would be saying something like 180 bpm after a sharp climb like that.

What goes up must come down. We are rewarded with a long, winding descent from the peak of the Mochi Koshi pass. Descending a hill at speed is quite a skill and Vincent glides down before us, apparently barely touching the brakes. He tells us later he reached 70km/h at one point. 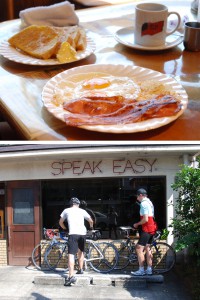 We freewheel back into Kyoto and grab a well earned lunch at the retro American diner Speak Easy. Vincent goes for the all-day breakfast and coffee; we polish off some tasty avocado and bacon burgers.

We saunter back to Demachiyanagi station and break down our bikes to stuff them back into their bags, a requirement for taking a bike on any train in Japan, unfortunately. We’ve covered just shy of 60km and it’s taken us some 4 hours.

There are routes to suit every level of rider in Kansai, so if hauling yourself over mountains doesn’t sound too appealing then head to the coasts for some gentler rides, or try a loop of Lake Biwa. Wherever you choose to go, simply head out of the city and you’ll soon find yourself enjoying some of the best maintained country roads in the world. Just stick to the paved ones.

Local pro bike shops: Not only can they kit you out with everything you’ll need, but good shops usually organise rides and can get you into amateur cycling races.
www.strava.com: Their free smartphone app tracks and records info about your ride. It automatically uploads the info to strava.com, enabling you to compare your performance to other riders in your area. Also a great place to find new routes since you can ‘follow’ other riders and access their training ride info. Great for short to medium distance rides, but be warned that the app will drain your battery fast.
www.kancycling.com: run by Kansai local Don Todt. It’s full of great rides and tips for the aspiring cyclist, with a focus on touring.
Touring Mapple Kansai: A great guidebook to help plan a mini tour. Produced for motorbike tourers, it serves just as well for cyclists, highlighting low-traffic, scenic roads, campsites and youth hostels. Available from good bookstores.

Fix up, look sharp in the city
Island Hopping in Scotland