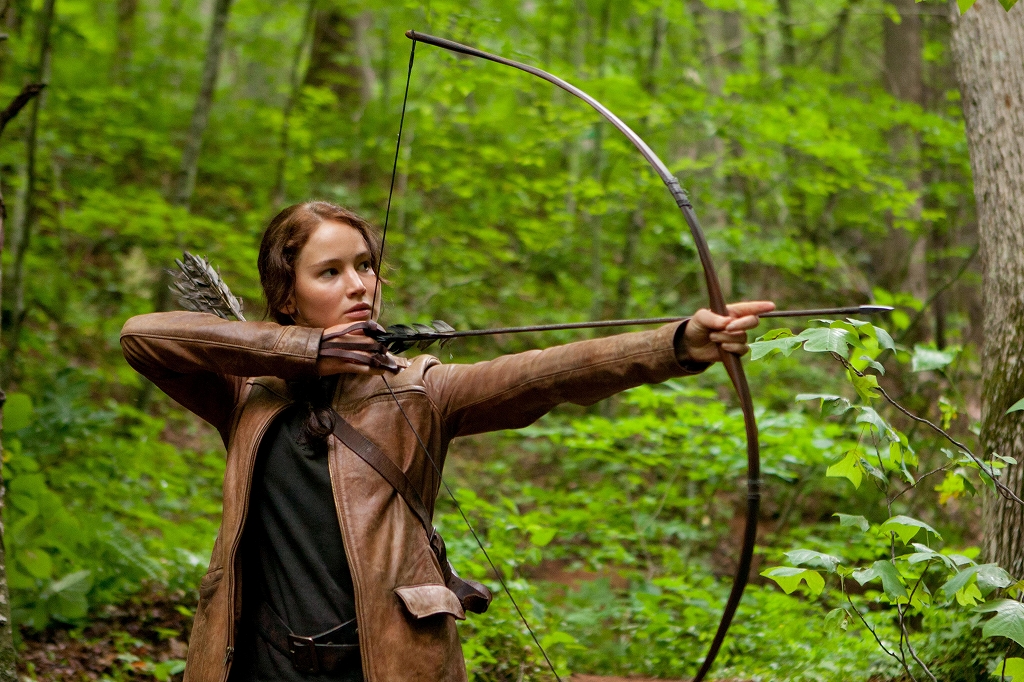 Hurrah! Despite rumours this movie wouldn’t get a Japan release date, here it is, though some months behind American theatres where it drew comparisons to a Japanese flick, Battle Royale.

The basic premise is admittedly close to the classic island-based killathon. In the BR project, a school class was sent to a remote island and students had to kill each other to win their freedom. A sadistic teacher controlled the place and provided the kids with weapons. The island itself had many traps, and students sometimes teamed up to survive, though of course most of them ended up dead.

In The Hunger Games, the US has been divided into districts based on wealth and skill. The top district features the shiny, wealthy city of Panem, and every year two people from each district must come to Panem and fight to the death in a special game zone.

Sixteen-year-old Katniss Everdeen is from the poorest district, and only feeds her family through illegal hunting, black market trades and basic survival skills. She volunteers to go to the games after her sister’s name is called to take part. Of course, the game arena has many traps and tricks to turn contestants against each other. Katniss’ cunning, bravery and archery skills might keep her alive for a while in the arena, but there can only be one winner here.

The Hunger Games is just book one of a best-selling trilogy by Suzanne Collins, aimed at young teenagers but enjoyed by many more canny adults. Longtime fans of the book have praised this thrilling adaptation, which delivers the heart of Katniss’ story in style and guts. She’s a believable, gutsy heroine who looks more at home in boots and archery gear than high heels and a fancy dress (though, of course she gets to wear both.) Just one more thing to know about Katniss’ adventure: the men in her life. She has a trusted hunting partner at home called Gale. There’s also a childhood friend in the arena, but can he be trusted in this game of trickery? May the odds be ever in your favour, Katniss.

Continue Reading
Advertisement
You may also like...
Related Topics:film, recommended

The Avengers
Fix up, look sharp in the city