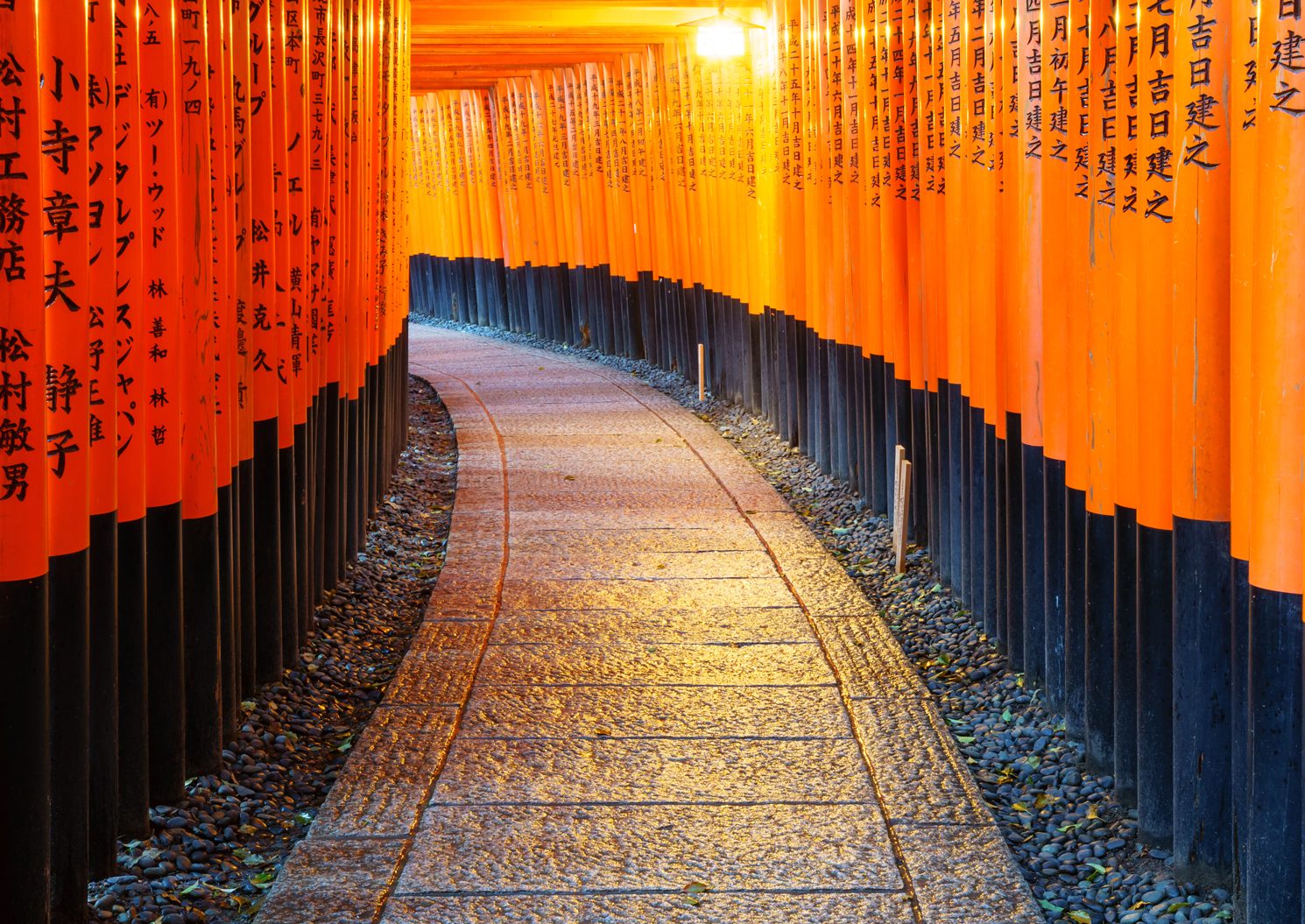 Kyoto is Japan’s cultural heart—an endlessly fascinating blend of the traditional and the modern. It’s a city which has plenty to offer both first-time travelers and regular visitors. Its collection of distinct neighborhoods each has an individual atmosphere and charm, and each is an unmissable destination in its own right.

This is the city’s main entry point, although the view on arrival might be somewhat unexpected; The futuristic steel-and-glass design of the station is at odds with the popular image of Kyoto as Japan’s historic capital. However, this lively hub of activity is well worth checking out. Drop into Isetan department store, The Cube shopping center, or the Porta underground mall for some retail therapy, or head to Kyoto Tower for a bird’s eye view of the city. This modern landmark is the city’s tallest structure, and the 100-meter-high 360-degree observation deck is the perfect spot from which to survey your new surroundings. 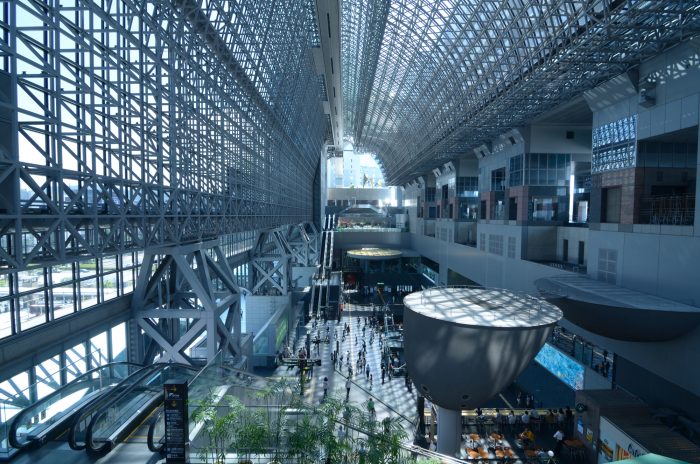 Kyoto Station, istockphoto.com/SeanPavonePhoto. The modern steel and glass design of kyoto station is seemingly at odds with its historical image.

For those eager to see cultural sites, some of Kyoto’s finest temples are within walking distance of the station, including the imposing Higashi-Honganji and its neighbor Nishi-Honganji. To the south stands Toji Temple, a UNESCO World Heritage Site easily spotted by its soaring 57-meter pagoda—the tallest in Japan. If possible, visit on the 21st of the month when the temple hosts a bustling market where you can peruse a staggering variety of new and second-hand goods.

Tucked away on the Kyoto’s western edge, this pleasant and popular district lies nestled at the foot of the mountains. The area is centered around the famous Togetsukyo Bridge, which dates back to the Heian period and spans 155 meters across the Katsura River. Translated as ‘Moon Crossing Bridge,’ it’s one of the best spots to view the district’s spectacular fall foliage. To escape the crowds, rent a boat and relax while gliding leisurely along the river. 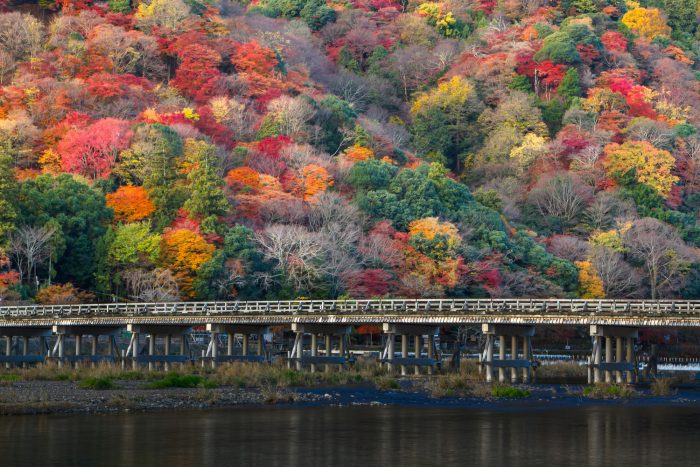 Togetsukyo Bridge, istockphoto.com/H_Yasui. The ancient bridge that crosses the katsura river is a perfect spot to view the autumn leaves.

Arashiyama is renowned for its sky-scraping bamboo grove. One of the city’s most photogenic locations, its serene otherworldliness envelops you as you stroll through the soaring green stems. The area also boasts its own UNESCO World Heritage Site—the striking temple Tenryu-ji. Its sprawling landscaped garden is centuries old and a prime example of shakkei (‘borrowed scenery’), with the surrounding mountains perfectly incorporated into the composition of the garden. 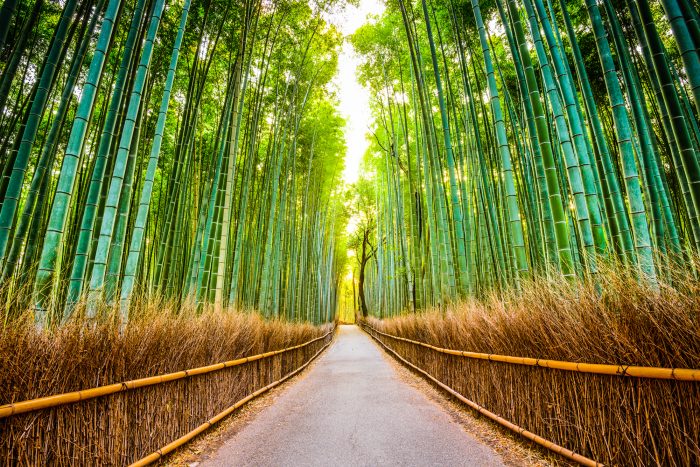 Arashiyama Bamboo groves, istockphoto.com/SeanPavonePhoto. Take a walk through the serene bamboo groves in Arashiyama. visit in the early mornings on weekdays to avoid the crowds.

Hike up to Iwatayama Monkey Park for the opportunity to hand-feed wild Japanese macaques and take in a spectacular view over Kyoto City. Afterward, head to one of Arashiyama’s many shojin ryori establishments, such as temple-restaurant Shigetsu, to feast on traditional temple fare. This exquisite Buddhist cuisine is made using seasonal ingredients and no animal products, with the intention of balancing body, mind, and spirit.

This is the beating heart of Kyoto, packed with shops, bars, and restaurants, all within walking distance of each other. Nishiki Market, aka Kyoto’s Kitchen, is heaven for foodies. A lively, traditional food market, it will overwhelm your senses with the sights, sounds, and smells of fresh, locally produced culinary delights. Take your time navigating the busy, narrow alley and sampling all that’s on offer, from tea to pickles and fresh seafood. 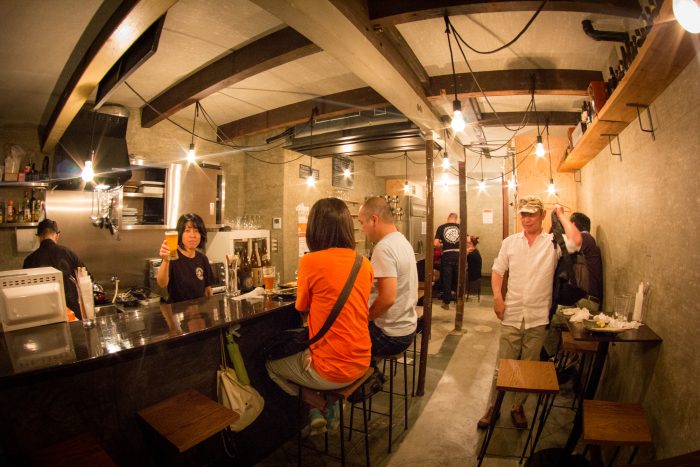 After working up a thirst, explore the local craft beer scene at Kyoto Beer Lab and Beer Komachi. For spirits lovers, Miltons Kyoto is not to be missed – a tiny but welcoming five-seat bar with a wide range of spirits and a rare no-smoking policy. Plus, if you are up for an indulgent dining experience, this district is the perfect place to try kaiseki ryori. An elegant, multi-course eating extravaganza, make a reservation at Kiyamachi Sakuragawa, Teramachi Yoshikura, or Umenohana for a delectable dining experience.

Shopaholics will delight in the vast range of temptations on offer, from independent souvenir shops in the Teramachi shopping arcade to big-name stores along Sanjo-dori. As night falls, this road plays host to a variety of street performers. Head a bit further north to encounter the district’s main sightseeing spots: Nijo Castle and the Imperial Palace. Both have immense historical and cultural value, showcasing traditional Japanese architecture and perfectly manicured gardens.

A flurry of labyrinthine alleyways, preserved machiya (traditional wood houses) and a myriad of temples and shrines, Higashiyama is the locale to visit to experience all the traditional charms of Kyoto. Go geisha-spotting in Gion, partake in the ritual of the Japanese tea ceremony, or indulge in an exclusive kaiseki ryori meal in one of the area’s top-class restaurants.

Visitors are spoilt for choice when it comes to temples in Kyoto, however, Higashiyama’s Kiyomizudera is a must-see. Perched upon the hillside, it offers a phenomenal viewpoint to admire the autumn leaves as they burst into a sea of red and gold. Sanjusangen-do Temple’s 1,001 statues of Kannon (the goddess of mercy) are a striking sight, and for those in more of an educational mood, the Kyoto National Museum exhibits a rotating display of artwork and cultural artifacts. 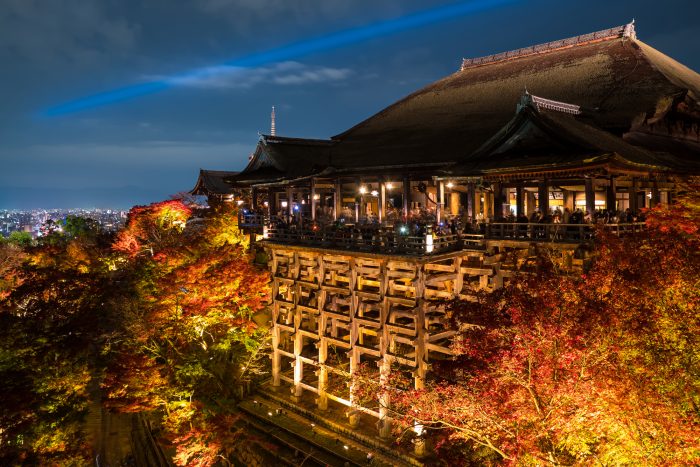 Kiyomizudera, istockphoto.com/luissybuster. Kiyomizudera looks amazing any time of year, but during the autumn season it is illuminated, looking stunning against the backdrop of autumn foliage.

Marking Higashiyama’s western border is the River Kamo, which cuts straight through the city. Well-trodden footpaths line both sides of the water, and nothing beats sitting by the riverside with a drink or picnic—and maybe even some sparklers!—on a warm night.

Sakyo ward stretches far north of Higashiyama up into the mountains, but it’s the arty, intellectual area in the south of this district that holds the most appeal. The home of Kyoto University, you can follow in the footsteps of one of its famous professors by strolling along the peaceful Philosopher’s Path, contemplating the meaning of life while listening to the gentle flow of the adjacent canal.

Heading north, this route culminates at the area’s flagship attraction, Ginkakuji (the Silver Pavilion). The muted sister to flaming gold Kinkakuji in the west, it’s a living example of the Japanese aesthetic of ‘wabi-sabi,’ or finding beauty in simplicity and imperfection. Just behind Ginkakuji is Mount Daimonji, on which a huge blaze is lit in the shape of the kanji character for ‘great’ every August to mark the end of Obon. Year-round it makes for an excellent short hike with panoramic views of the city from the hillside. 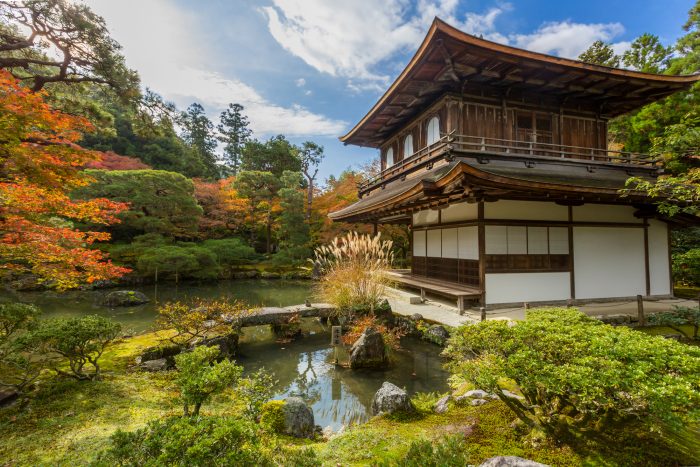 The simplistic beauty of ginkakuji in sakyo-ward was meant to be gilt in silver but never completed.

For a more challenging climb, travel further north again to the towering 848-meter Mount Hiei, one of Kyoto’s most sacred mountains and home to yet another UNESCO World Heritage Site, Enryakuji. This huge temple complex—also accessible by cable car—is especially magnificent in the autumn as the surrounding trees drop their leaves and carpet the area in crimson.

The north-west of Kyoto is slightly out of the way compared to other districts, but well worth making the effort to see. Here you’ll find the dazzling golden pavilion of Kinkakuji, one of the city’s most Instagrammable spots, and a sight that genuinely lives up to expectations. Just around the corner, the walled Daitokuji temple complex hides a number of serene Zen gardens and offers the chance to try zazen meditation. After satisfying your spiritual side, stop by the nearby Imamiya Shrine to indulge in freshly baked aburi mochi from one of the two teahouses outside the eastern gate. Both have been making these bite-size grilled rice cakes for centuries.

Overlooking the entire area is Mount Atago, the tallest mountain in the city at 924 meters. The hike up (no cable car for this peak!) is basically one long, arduous staircase, but at the summit, you’ll be treated to sweeping views and one of the least crowded shrines in Kyoto. North of the city, there are several smaller, more rural towns that make great side trips. Kibune is an autumnal wonderland of shrines and ryokan (traditional Japanese inns), and Kurama’s quaint atmosphere, mountain air, and steamy hot springs are a refreshing break from the bustling city. A hiking trail connects the two, making it easy to visit both in one day.

If there’s one image of Kyoto that’s permeated to all corners of the globe, it’s the seemingly endless tunnels of vermilion torii gates that comprise Fushimi Inari Taisha. This vast Shinto shrine complex is one of the highlights of southern Kyoto, stretching back over the mountainside, a maze of fox statues, hiking trails, and tourists (visit early mornings on weekdays to avoid crowds). The narrow streets leading to the shrine teem with food stalls, souvenir shops, and restaurants selling kitsune noodles. These come topped with deep-fried tofu – said to be a favorite food of the fox messengers of Inari in Shinto lore.

Slightly north of Fushimi Inari lies Tofukuji Temple, one of Kyoto’s most impressive temples and best spots for viewing the autumn colors. Further south, you’ll come across the district of Fushimi, the city’s sake-brewing area. A tranquil and traditional neighborhood, it’s home to nearly 40 sake breweries, making it one of the country’s leading sake-producing spots. Follow the heady scent of fermentation and pop into Gekkeikan, Aburacho, or Fushimi Yume Hyakushu to sample a local tipple. If you’re more of a beer fan, don’t miss Kizakura Kappa Country, which brews some of the best craft beer in the city.