Osaka is a city of neighborhoods, many of them undiscovered by passing travelers who never venture beyond the neon lights, kitsch trinket shops, and giant plastic food sculptures of the touristy Dotombori area. Osaka’s true character lies in the labyrinthine alleyways and backstreets of Namba, Shinsaibashi, Tenjinbashi, and beyond. Get a true taste of Japan’s friendly city by mixing with the locals in one of these unique neighborhoods.

Osaka is known as kui-daore no machi, ‘the town that loves to eat,’ and there are few places that can compete with the epicurean paradise that is Ura-Namba. Literally meaning “back” or “secret” Namba, Ura-Namba is a hidden-away gastro gem alive with the energy and vigour of a younger generation keen to gentrify the neighborhood into the number-one Osaka food hub. Here, you will find various izakaya (Japanese-style pubs), tachinomi (standing bars), gourmet restaurants, and the trendy Torame Yokocho; a group of restaurants with a large vermillion torii gate at the entrance. Ura-Namba offers the delectable taste of Osaka in a very cool atmosphere, and at very reasonable prices.
Access: Nankai, Kintetsu, or Subway lines, Namba Stn, one-minute walk

Hozenji Yokocho Alley is a stone-paved street offering a multitude of well-established Japanese dining options such as the two-Michelin-star kappou (counter-style) restaurant Kigawa. There is a collection of around 60 small restaurants, izakaya, bars, and eateries in the area behind Hozenji Temple. This location embodies the old world of Naniwa (what the city was called before it became Osaka) and is hidden down the backstreets near Dotombori. The street has been filled with nightlife since the 17th century when the area was a theater district. Hozenji Yokocho Alley is popular with local celebrities such as actors, writers, and artists. Stop by, say a prayer, and splash some water on the moss-covered Fudo-myo statue, known as Mizukake Fudo.
Access: Nankai, Kintetsu, or Subway lines, Namba Stn, 10-minute walk

For clubs and bars, and somewhere to go at any hour of the night, head to Amerikamura (American Village). ‘Amemura,’ as it is called, centered around the small and unassuming Sankaku Koen (Triangle Park), has a kind of grittiness to it, making it the perfect location to be Osaka’s youth fashion hub. Here you will find a mishmash of eclectic street fashion, Rasta-style, goth, punk, and skater-style, alongside designer vintage and Japanese urban chic. There are many “buy and sell” used clothing boutiques, with Kinji and Kilostore in the Bigstep building being great places to start. Amemura is also the place to go for the latest trends in local art and music. Value-adding not only to their businesses but to the culture of the area, some fashion stores directly involve artists and musicians with their enterprise. Yasuhito ‘MJ’ Morita, who owns Fedup, a store selling “strictly hip-hop gear,” has a small music studio next door which he rents out for recording sessions, or just opens up for artists to freestyle and jam in. Fedup also releases mixed CDs and organizes big, outdoor hip-hop parties to promote various artists.
Access: Midosuji Subway line, Shinsaibashi Stn, Exit 7 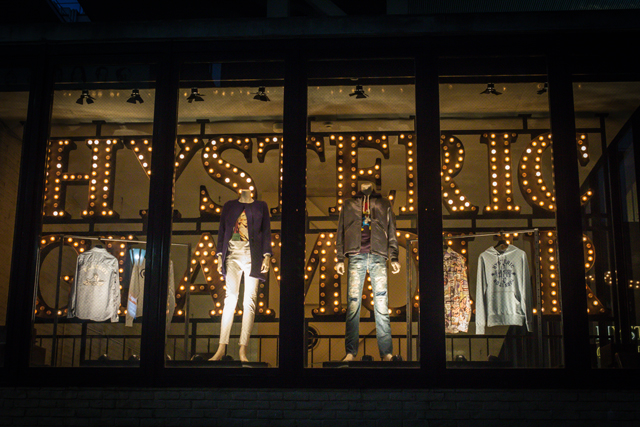 Tachibana-dori, or Orange Street, is a top spot for shopping with sophistication. Formerly a furniture district, this one-kilometer stretch of street is neatly lined with unique, stylish, and up-market clothing and homeware stores. The Orange Street scene really encompasses the entire area around Minami-Horie. Discover stores like Detail, a half home décor, half gift shop, filled with creative designs, and the roomy Café Contempo, which looks like a home-décor emporium but is actually a spacious café. Plant-and-gift shop come bar and café, Biotop is a great place to take a pit stop, order a glass of sparkling wine or a tasty pizza, and gather inspiration. Having a very different mood from the labyrinthine Amemura, Tachibana-dori is far less crowded and more elegant in appearance. The best time of day to go is just after sundown; the night lighting in these sleek and stylish stores adds a special air to the upscale shopping experience.
Access: Yotsubashi Subway line, Yotsubashi Stn, Exit 5, two-minute walk

Temma comes to life at dusk, from about 6pm to 9:30pm, when the myriad of authentic Osakan “mom-and-pop” style restaurants serve their cuisine to locals, salarymen and women, and any tourists that happen to stumble upon this gastronomic gem. In the alleys winding away from JR Temma Station, Beer Belly can be found serving up pints of Osaka’s own Minoh craft beer. In the daytime, the Tenjinbashisuji shotengai (covered shopping street) — the longest shopping arcade in Japan — is bustling with boutique shops, second-hand stores, and plenty of local culinary treats.
Access: JR Loop line, Temma Stn

The Fukushima area is where renowned Osakan street artist Grind Pencil has made his commissioned mark at JR Fukushima Station with his Seven Lucky Gods graffiti work. The colorful, energetic vibe of his artwork distinctly matches this bustling café, bar, and restaurant-filled area. Fukushima is teeming with izakayas, tachinomi, and mouth-watering eateries; the perfect spot for a night of exploration and chatting with friendly locals. An after-dinner stroll toward Dojima river is recommended to admire the glowing river lights and modern Osaka skyline.
Access: JR Loop line, Fukushima Stn 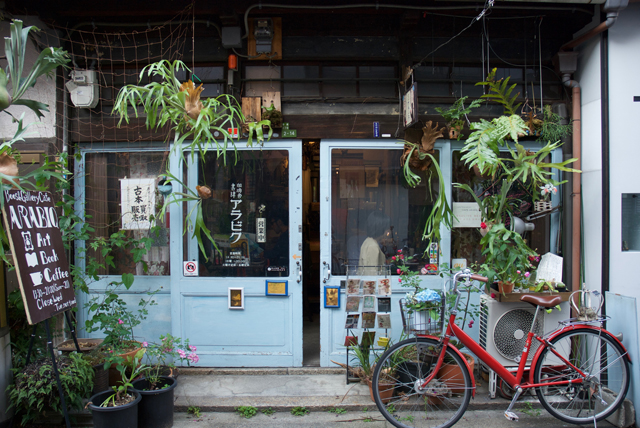 Photo by Jason Haidar: THE ENTRANCE TO CAFE ARABIQ IN NAKAZAKICHO.

Nakazakicho is Osaka’s bohemian neighborhood which still retains the feel of old Japan with buildings dating back to the Showa era. A short stroll from the hustle and bustle of busy Umeda, Nakazakicho’s maze of lanes and secluded, vine-draped cafes provide an atmosphere so quaint, it is hard to believe it is so close to the busiest part of town. Aspiring artists call this area home, which explains its retro charm and proliferation of small, trendy businesses from yoga and tea shops to vintage-clothing shops like Green Pepe, Tad, and Petit Bonheur.
Access: Tanimachi Subway line, Nakazakicho Stn

Known as the home of ‘Korean Town,’ Tsuruhashi comprises around 800 shops in six marketplaces and shopping streets. The maze-like avenues of Tsuruhashi date back to the end of WWII. Around the station and under the train tracks, there is a labyrinth of market stalls selling imported items, K-pop merchandise, and of course, delicious Korean food, all for reasonable prices. There are many yakiniku (BBQ meat) restaurants and specialty stores such as Korean grocery stores. Chefs from Kyoto and Osaka gather early in the morning to get the finest fresh seafood from the wholesale fish market.
Access: Kintetsu line, Tsuruhashi Stn 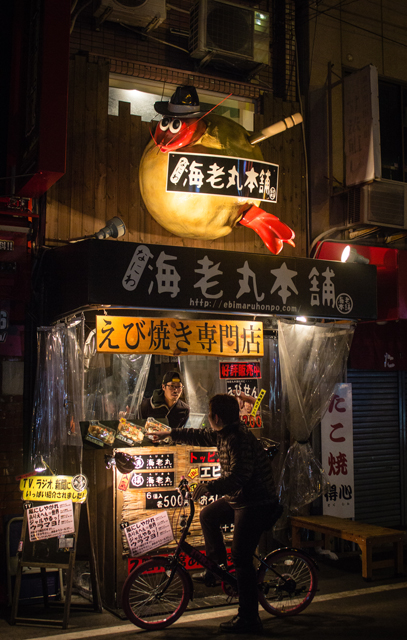 Photo by Jason Haidar: A CUSTOMER ON A BICYCLE ORDERS EBIYAKI FROM A STREET FOOD STALL.

Famous for fugu (blowfish) and kushikatsu (meat and vegetables fried on sticks), Shinsekai is not the swankiest part of town but it has been serving up Osaka’s famous soul foods for more than 100 years. Osakans love their B-kyu (literally “B-class”) no-frills dining culture, and Shinsekai is the perfect spot to pick up some okonomiyaki (savory pancakes) or takoyaki (octopus balls), or to visit the famed Daruma – one of the original kushikatsu vendors. The heart of this neighborhood is the Tsutenkaku Tower, built in 1912 as part of a makeover of the area.
Access: Sakaisuji Subway line, Ebisucho Stn, 2-minute walk

Japan in Your Ear
Sakura Warriors: Hear Them Roar!